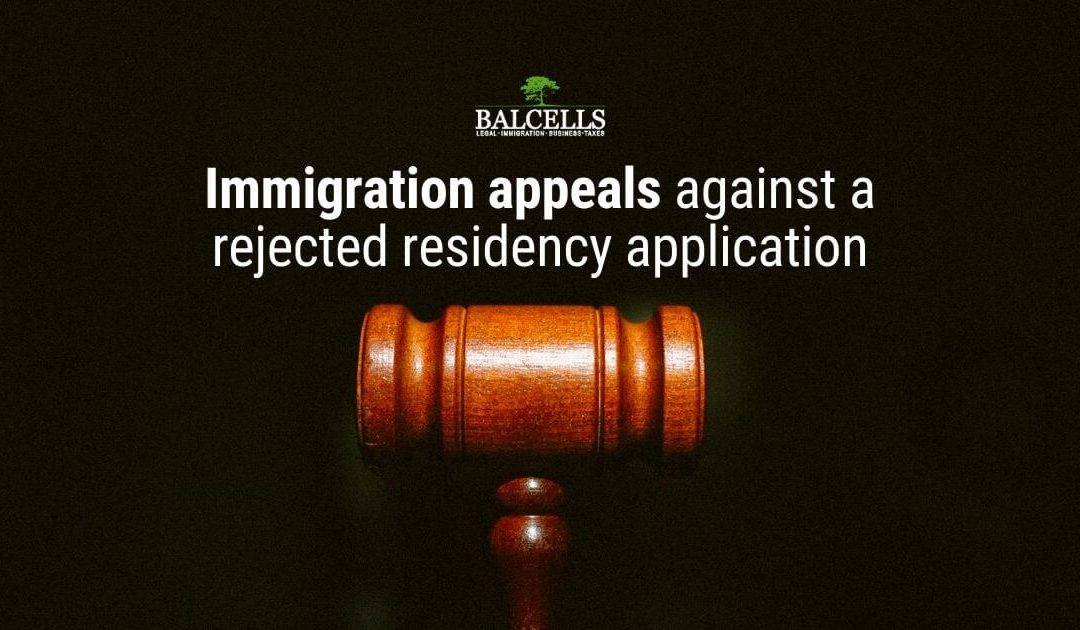 Many foreigners think that once they get their residency application rejected, the world ends and they have lost all chances to obtain residency in Spain. But nothing could be further from the truth. They still have 3 different options or steps to finally be granted their residency card, the 3 available immigration appeals.

We will understand their main differences among them, when it is necessary to file one or the other, the deadlines and response times, and extra advice that will be very useful for the successful filing of your immigration appeal against a rejected residency application.

Content hide
1 What is the purpose of an immigration appeal?
2 Advantages of filing an immigration appeal
3 The types of appeals depending on the institution to which you file it to
3.1 General appeal (“recurso de alzada”)
3.2 Appeal for reconsideration
3.3 Contentious-administrative appeal
4 What are the time limits for appealing?
5 How long does the response to an appeal take?
6 What should my appeal include?
7 Can I leave Spain if I have filed an appeal?
8 Key to success with your appeal

What is the purpose of an immigration appeal?

An immigration appeal is a request made in the form of a formal written document by which we express to the immigration office (or the any other competent institution as we will now see), the disagreement with the rejection of our residency application, requesting that it be reconsidered.

That is to say, we request that our file gets re-evaluated since we consider that we do actually meet all the requirements or that there has been a mistake.

That is why it will be key in this process to properly allege the reasons why we consider that we should receive a favorable response.

Advantages of filing an immigration appeal

If you have obtained a negative resolution in your residency or renewal application, is it worth the effort and time that an appeal requires? Or is it better to accept the negative decision definitively?

The reality is that filing an appeal is highly recommended, and in this section we will state the main reasons why.

First of all, it is important to understand that you will not be losing not losing anything with this process (beyond the time it takes to prepare it). Appeals do not have any associated costs or fees (so filling one is totally free), and the worst result you could get is to stay with the same rejection (but, on the flipside, you have a lot to gain).

On the other hand, during the duration of your appeal you will maintain the right to stay in Spain, so you will avoid the possibility of receiving an expulsion file.

And, in addition, during the temporary period in which the appeal is being processed, you could resubmit your application (from 0) or start a new one; hence the appeal would allow you to gain extra time to regularize your situation.

Generally speaking, there are two types of appeals available to fight against a negative decision.

Depending on the institution to which you submit your appeal, we find the following two main groups:

Do you have any doubts up to this point? Keep reading this post for more information or ask any questions to our lawyers here:

Within the administrative path, the first type is the appeal called “recurso de alzada” in Spanish.

It can be filed when the administrative procedure has not yet been exhausted.

That is, it will take place when the person (public worker) who has analyzed your file and has sent the negative response to your application is not the highest authority or highest responsible within the competent institution (i.e., the Immigration Office or Government Subdelegation).

In these cases, you will be requesting the direct superior of that official who has resolved your application to review it in order to determine whether his co-worker has made a mistake or not.

As is logical, you will have to argue your motives and specify for what reasons exactly the resolution has been issued erroneously.

The filing of this type of appeal is obligatory if you wish to subsequently access the judicial process.

In those cases in which you have sent an appeal to the head of the administration to reconsider your application and you have received another negative response, then you can file an appeal for reconsideration.

As there is no longer anyone above this person who can re-study the file, what we are doing is asking this person (worker in charge of the Immigration Office or Subdelegation of the Government) to review his own decision (again).

If the appeal is correctly presented and sufficient reasons are provided, it is very likely that you will get your residency application finally accepted through this path.

You can start filing this appeal online through this link.

We understand then that the immigration office will no longer modify its decision, so now we must go to a judge in order to try to rectify the verdict.

Thus, this contentious-administrative appeal is a judicial procedure used to contradict general provisions and express acts of the Public Administration.

What are the time limits for appealing?

The deadlines for appealing a rejected immigration application (i.e., the maximum time you have to initiate this procedure) are fundamental to be able to finally succeed in the process.

What are the time limits established by law?

How long does the response to an appeal take?

On the other hand, it is also important to understand how long you could be waiting to receive a response to your appeal.

Again, this time period varies depending on the type of appeal:

Although these are the general deadlines, bear in mind that depending on the city and Autonomous Community in which you live, it is possible that you will receive a response in much less time.

What should my appeal include?

Administrative appeals should not have a specific or stipulated form. That is to say, by law, there is no predefined base structure that must be followed in all cases.

However, in our office, we prepare them under a carefully crafted legal viewpoint and try to adapt as much as possible for a correct understanding by the immigration office (and that is what we suggest you do too).

Although they do not have a specific form, they must contain certain minimum elements, which includes:

Including these data and with proper/valid argumentation, the appeal would be viable.

In addition, bear in mind that the person entitled to sign the appeal must be the person who is the subject of the decision, i.e., the applicant.

Can I leave Spain if I have filed an appeal?

Unfortunately no, if you have filed an appeal you will have to remain in Spain until you receive a response.

This is a doubt that many foreigners have on a regular basis, something logical since they compare it with the case of those who wait for their residence card to be renewed and ask for a return authorization (“autorización de regreso”) in order to be able to travel.

The difference lies in the fact that when we file an appeal we have first received a negative response denying us residency, so in principle, we are not legal residents in Spain (unlike the cases in which we wait for the card after an approved application).

Key to success with your appeal

Filing an appeal is not a highly complex task, but it is true that it requires preparation, analysis, and well-founded allegations.

These are the last options you have to ultimately avoid an application rejection, so the stakes are high.

So much so that our recommendation is that you count on a team of expert lawyers for the presentation of this file, as we do in Balcells Group on a frequent basis.

In this case, not only can we guide you step by step so that you can present the appeal in a correct and practical way, but we will also make sure that the allegations for which you request the review of your file are sufficient and correctly arranged to finally achieve success in your request.

Hence, if you would like to file an appeal, please contact us and let us advise you as soon as possible: