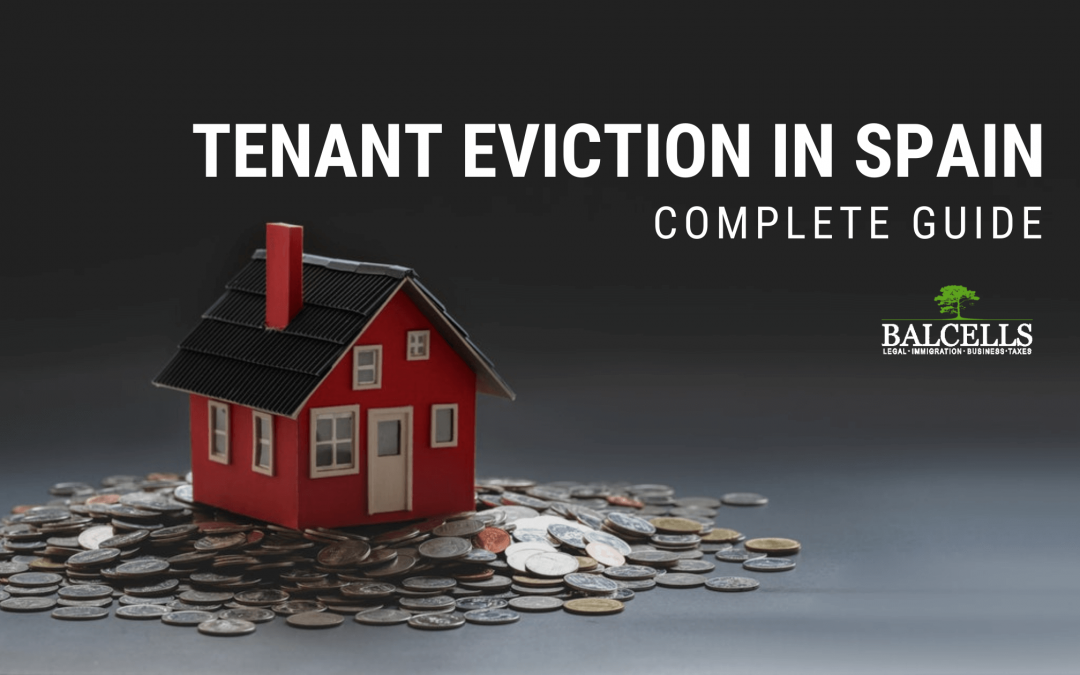 Without any doubt, a topic of great importance today. Because unpaid rentals and conflicts with the tenant are totally common in Spain nowadays. But in this article we talk about the solution. Thus, we will analyze everything you need to know about the tenant eviction process for non-payment of rent, also known recently as express eviction or “desahucio express”. We will deeply analyze how the process works step by step, which conditions must be met in order to initiate it, how long it takes, and other frequent questions that will be very useful for you.

What is an eviction?

Eviction is the legal procedure by which a landlord can evict a tenant for non-payment of the rent.

In other words, it is the process by which the owner of a house or apartment that was rented to a third party, resorts to the law to evict the renter from that property because he has not complied with the payment negotiated at the end of the month.

Most often, the landlord has first tried to solve the problem directly with the tenant, in a “friendly” manner. However, when this attempt fails, the landlord decides to file an eviction lawsuit so that a judge can make the decision. The tenant who fails to make the payments is then forced to leave the property.

In addition, it can be said that this process is based on a double claim. On the one hand, the eviction is demanded (that is, the tenant must leave the property); but at the same time, the tenant must also comply with the payment of all unpaid rents up to the date in which he leaves the property.

Understanding the obligation within rental contracts

It is important to understand as clearly as possible which are the exact legal obligations inside a rental contract. That will be the core of the future allegation.

In a rental agreement, the landlord agrees to make her house available to a tenant. She will still be the owner, but will delegate the possession. The tenant must pay rent (the monetary amount) at the end of the month in return for its occupation and use.

Thus, the tenant is obliged to pay this money on a monthly basis. And this obligation is totally independent of other problems that may arise, such as the landlord refusing to pay for a home renovation.

And here comes the important point of the section. This refusal would not be a valid reason for the person living in the rental apartment to stop paying or to deduct the repair from the rent.

That could be a cause for eviction.

Any secondary obligation of the lease won’t interfere with or prevent the primary obligations from being met.

It is also fundamental to understand what laws and regulations govern this eviction procedure for rent non-payment.

In the first place, the Urban Leasing Law or LAU (“Ley de Arrendamientos Urbanos) is the one that establishes under which assumptions eviction could take place. For in its provision 27.2 a) it establishes that the landlord may terminate the rental contract as long as the tenant has failed to pay the established rents.

On the other hand, it is the Civil Procedure Law (“Ley de Enjuiciamiento Civil”) that dictates how the judicial and legal process of eviction is to be carried out, in its article 440.3 and 440.4.

Types of eviction in Spain

There are nowadays in Spain different types of evictions. Let’s see them in detail:

How long do you need to wait to request an eviction after the tenant not paying?

Before diving into how the legal process works, let’s answer a very important question first.

Because, if you have a tenant who has failed to make payments, you are probably asking yourself: how long do I have to wait until I can sue him and request eviction for non-payment?

From a legal standpoint, you can do it after the first fault. That is, after the first month of non-payment and after having claimed it amicably, the Rental Law already allows you to start the judicial procedure.

Nevertheless, and on a practical level (since it is a costly procedure both in terms of money and time), the recommendation is to wait for the non-payment of two consecutive payments.

However, you can send a bureaufax at any time notifying the tenant of the need to pay (after the first non-payment, for example). After such notification, you will have to wait 2 months until you can impose the legal action.

How does an eviction process work? Step by step

The court procedure for an express eviction and an end-of-contract eviction is quite similar.

It begins with a lawsuit. This must be signed by a lawyer and a solicitor and must be accompanied by the payment of court fees and the rental contract.

But, to whom should we issue this lawsuit? In this case, the competent court is the one corresponding to the domicile in which the property is located, independently of where the debtor has his domicile.

The court will issue an order (the right of admission) within 30 days, admitting the lawsuit, establishing a date for the trial, and another for the eviction. And that is where the process becomes very fast. At the same time that the lawsuit is admitted for processing, we already have an eviction date (which will obviously occur if the property owner wins the trial).

After the admission and trial date is set, the tenant is sent a lawsuit. Basically, the court requires the tenant to pay what he owes within 10 days.

And here the tenant who has defaulted has four different options:

There is, however, one important exception that we must take into consideration. There are two situations in which the eviction would not be annulled even if the tenant pays the rent within the established period. This will be the case if it is already the second lawsuit filed by the landlord with the same tenant, or if by means of burofax or through a notary, the landlord has made a request for payment that has not been answered within 30 days.

Reasons why the process may be delayed

If you read the previous section you may think that the procedure is quite fast. You file the complaint, the judge receives it, notifies the tenant and the he has 10 days maximum to respond (or not).

However, there are two situations in which the process could take longer than expected.

The first is when the judge notifies the lawsuit to the tenant. This can be delayed and cause the tenant to receive the notice late, as it is the court mail service who is in charge of doing it, and they are usually overloaded, resulting in up to 2 months of delay. Our recommendation? Have your attorney notify the lawsuit. This way you will avoid delays in this first part of the procedure.

On the other hand, if the tenant requests free justice after receiving the lawsuit, the deadlines for opposing it will be suspended. In other words, those 10 days are suspended until a public lawyer is assigned. And that can take more than 1 month. And in the vast majority of the cases the tenant opposes with a public defender, not with a private lawyer.

This free justice can be requested during the first 3 days after receiving the complaint.

How long does it take to evict a tenant in Spain?

After reading the previous section you can get the idea that it is impossible to define a precise exact length. The process varies greatly depending on the court and the tenant’s actions during the process, and giving an exact answer is complicated.

However, as a general rule, keep in mind that the process could take about 4 or 6 months.

Again, it will depend greatly on the specific judge (depending on the city they go more or less quickly), the time it takes to notify, whether or not the tenant avails himself of legal aid, etc.

How much does an eviction cost?

One of the questions that many people ask is related to costs. How much is the eviction going to cost me, taking into account the whole process?

Thus, there are only three main costs that the owner will have to assume in order to regain possession of his property.

And that is because there are no costs to file a lawsuit; and if the lawsuit is filed and won, the associated trial costs will be paid by the tenant.

Thus, the landlord should only worry about paying the lawyer who will handle the case (it is mandatory to have one), the procurator, and the locksmith who will come to the house to open the door on the date of the eviction.

To give you a general idea, you can expect that the total cost will be around 500 or 700 euros.

Do you need legal help? Eviction lawyer helps you out

And up to here everything you need to know about the express eviction. After analyzing conditions, step by step judicial procedure, timings and the most important requirements, it is very likely that you still have doubts.

Thus, our team of rental lawyers is at your complete disposal.

Besides, if you need us to directly manage the whole legal procedure for you, providing the highest possible security, and making you not worry about anything, send us an email detailing your situation and we will start as soon as possible.