How long can a Spanish resident be out of Spain? 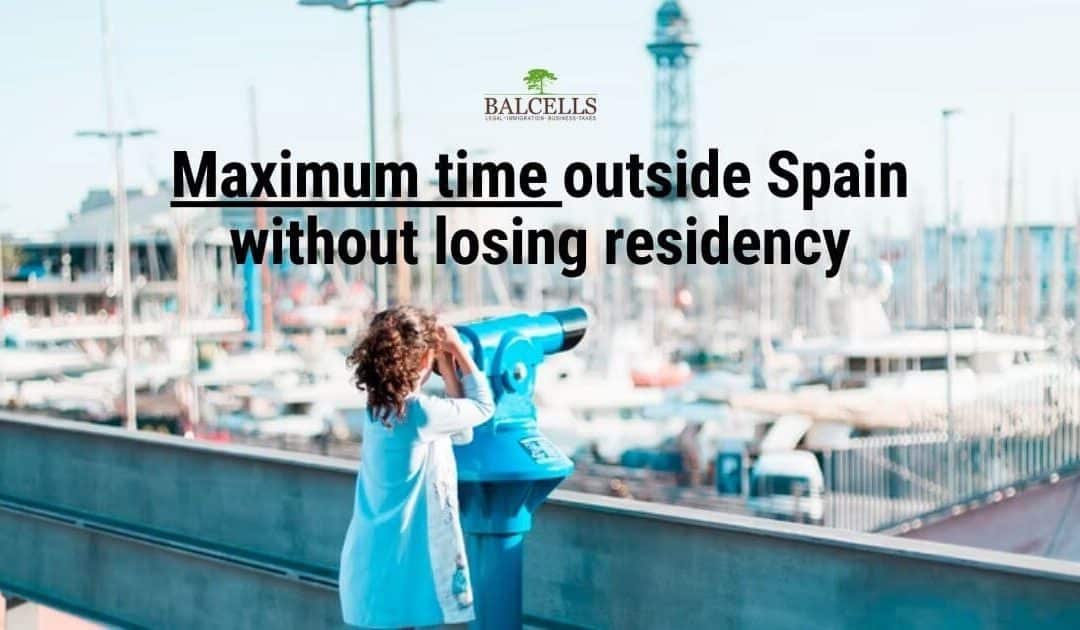 If you are a legal resident in Spain and you would like to stay in the country for the long run… keep on reading. Because in order to do so, you will have to renew your residency card, and that means complying with the maximum leave times that the immigration law establishes. That is why, in this article, we analyze how long you can stay out of Spain as a resident without losing your residency. We will explore the differences depending on the type of card you own, and if there is any solution in case you have missed the deadline.

Content hide
1 How long can you leave Spain if you are a resident?
1.1 Temporary residency card under the general regime
1.2 Residency under community regime (temporary)
1.3 Permanent community residency card
1.4 Long term card (permanent residency)
1.5 EU Long term residency
2 When do these deadlines start counting?
3 Can I recover my residency if I have been out of Spain longer than the allowed time?
4 Time out of Spain and how it affects to obtain the nationality

How long can you leave Spain if you are a resident?

Once you have obtained your residence card, you must be careful. Being out of Spain for a long time can mean losing your residency.

Thus, although the Spanish immigration regulations allow you to leave the country and travel abroad (for example during Christmas, to visit your relatives, etc.), the truth is that it establishes a maximum period of time available to do so before your card expires and hence lose it (an extinction that, as we will later understand, may mean the impossibility of recovering your residency in the future).

That is why it is so important to know and respect these deadlines, even before starting your application (so that you can plan ahead).

However, each card has its own particularities.

This means that the leave periods allowed will vary depending on the card you possess.

To determine how long you can stay outside Spain, therefore, the first thing to understand is what type of card you own (temporary or long-term), and under what regime (general or community).

Below we analyze the particular terms according to each type of residency.

First of all, we find the temporary cards, which are obtained initially for 1 or 2 years.

We are talking about the most typical cases, such as the arraigo, the non-profit residence, a regular work permit, etc.

In any of these cases, you are allowed to stay outside Spain for a maximum of 6 months within the period of one year.

Otherwise, if you stay longer than this period, you will not be able to renew your residency.

As an important note, keep in mind that the fact of staying these 183 days (at least) in the Spanish territory will turn you into a resident for tax purposes (something different from being a resident at the immigration level, but with important consequences at tax one).

On the other hand, we find the case of the temporary residence under the community regime, which behaves somewhat differently from the previous one.

We are referring to the card as a family member of an EU citizen, the residence that is obtained thanks to being the relative of a European Union citizen.

In this case, even if you possess a residency valid for 5 years, that is not a long-term card (but a temporary one).

Therefore, you also have a maximum of 6 months within 1 year to leave and travel out of the country before the card expires.

However, the difference, in this case, is that these 6 months can be extended up to 12 in some specific cases. We are talking about situations that force you to leave the country, for example:

On the other hand, in the case of being the holder of a card under the EU regime but of a permanent nature, you will be able to stay outside Spanish territory for a maximum of 2 years until its renewal.

In the case of the long-term card (a residence for 5 years), the period allowed is extended up to 1 year continuously and consecutively, but this time taking the EU (and not Spain) as the geographical reference.

In other words, in order to renew this card, you must not have stayed outside the entire territory of the European Union for more than one consecutive year, which creates much more favorable conditions.

Moreover, counting sporadic departures, within the period of the last 5 years your departures cannot total more than 5 months.

And, in fact, this case is typical for many foreigners.

If you are generally living outside the EU, you should return to Spain or any country within this zone before the end of the year, ask for your passport to be stamped, and with that simple act, you can return to your usual place of residence and then renew your card when it expires without trouble.

And, finally, we find the case of the long-run EU card, another residency for 5 years but also with its own particularities.

While it is true that this residence is the door to move and settle in other European countries, failure to return to Spain within the established period would cause it to expire.

Thus, to avoid losing the long-term EU residency, you cannot stay outside Spain for more than 6 consecutive years.

When do these deadlines start counting?

A fundamental thing to keep in mind in order to do the calculations correctly and avoid staying out more than the allowed time is to know exactly when these terms and leaves start to count.

For those 6 months or 1 year allowed out, when does the time start to run and when and how does it end?

Again, the answer depends on the type of card held:

Can I recover my residency if I have been out of Spain longer than the allowed time?

Unfortunately, this is a situation that happens quite frequently.

In most cases, due to ignorance of the different deadlines, many foreigners spend more than the allowed time outside the national territory.

In these cases, the first thing to keep in mind is that you will be able to return to Spain without any problem. You will not be banned from entering at any time, since you are still within the residency period.

However, two things can happen:

In either of these two cases, you would lose your card and your residency.

Is it possible to get it back? It depends on the card you hold:

So far we have seen the deadlines you must respect if you want to keep your residency, renew it and stay in Spain legally in the long term.

If your intention is to apply for and obtain Spanish nationality, then you must be much stricter.

It is a prerequisite for the application of nationality by residence not to have been abroad for more than 3 months continuously if you want to successfully obtain it.

Also, keep in mind that once you get it, you could end up losing it if you do not use it within 3 years after its attainment. In this article you will find all the details you must know so that you can avoid losing it.

Do you have any doubts? Our team of immigration lawyers will be happy to help you. Ask us anything here: