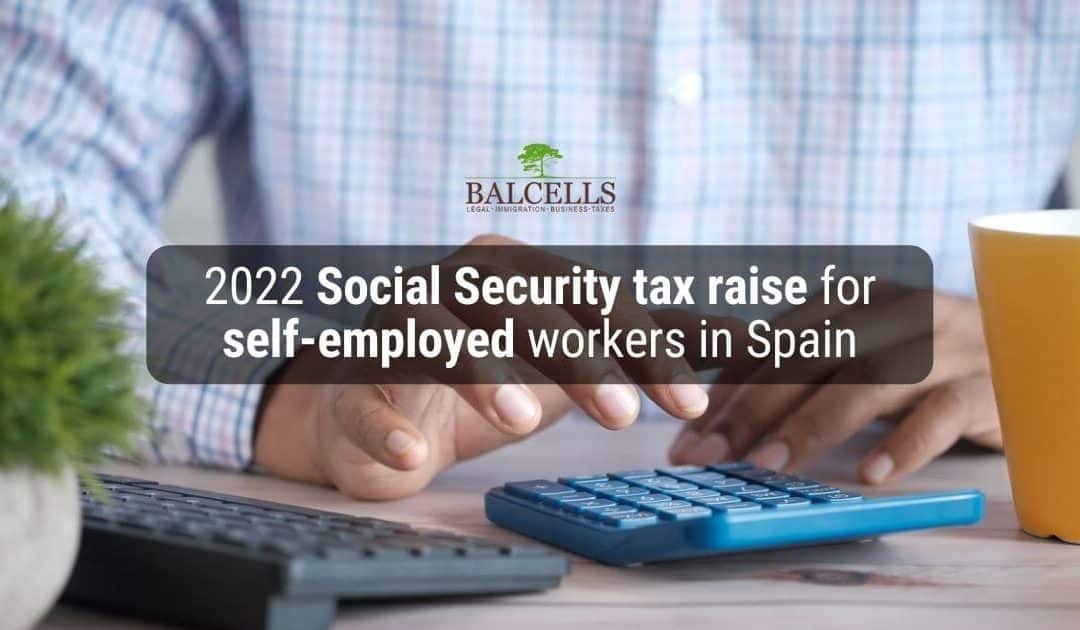 With the approval of the General State Budget for 2022, many changes have taken place when it comes to Spanish taxes. Among the complete list of modifications, one of the most outstanding ones is the increase in the self-employed quota or contribution minimum base. But, by how much will the payments that these self-employed workers have to make each month be rasised from now on? How are the contribution bases affected? And what may be even more alarming, what changes will come from 2023 onwards for this group? In this article, you will find the answers to all these doubts.

Content hide
1 Before we start… how do the contribution bases and quotas work in Spain?
2 Exact numbers: Self-employed/”autónomo” Social Security Contributions incrase for 2022
3 How much extra will the self-employed pay each month from now on?
4 Big contribution increases for the future

Before we start… how do the contribution bases and quotas work in Spain?

Before analyzing the exact data in relation to the increases for the self-employed monthly contributions for 2022, we must first understand how two fundamental concepts work relate to eachother: the contribution base and the contribution fee.

As a self-employed worker in the Spanish territory, you can choose your contribution base between a minimum (until now of 944€ per month) and a maximum (4.070€ per month also until now).

This choice is totally free and can be modified in the future.

To this base is applied a contribution fee, which is approximately 30%, that defines the monthly amount that this independent worker will pay to Social Security, regardless of the revenue she generates each month.

This fixed monthly amount is used to finance the self-employed person’s future retirement pension so that she can choose whether to “invest” more in her pension now so that it will be higher in the future by choosing a higher contribution base.

But let’s remember that this Social Security contribution is just one of the two main taxes that this self-employed worker pays, because after that there is also another very important payment: the payment of the IRPF or income tax.

That being said, we can now explore how the applied quota and the minimum and maximum bases have changed with the new general budgets.

This increase will be maintained during 2022, since now the minimum contribution bases will be increased:

With this measure, the government’s aim is to collect an extra 1 million euros (8.9 million euros vs. the 8.8 million euros currently collected) simply with this increase of 5 euros in the minimum contribution base.

But this information provides incomplete data. What is really important is to understand how the finances of “autónomos” will look from month to month.

How much extra will the self-employed pay each month from now on?

We must remember that this minimum contribution is the one chosen and paid by more than half of the total population of self-employed individuals in Spain, so it will affect most of the 3 million freelancers in the country.

In other words, we are talking about an increase of between €96 and €225 per year (adding these increases in bases and rates), something which, although may not seem as much, comes at a time of total uncertainty in the macroeconomic situation in which most independent professionals are still recovering from the pandemic.

But that’s not all, because from 2023 onwards the really noticeable rises begin.

Big contribution increases for the future

This, as we will now see, will mean in certain cases experiencing a 5x increase in these contributions.

This is how ambitious the structural changes that will take place in the RETA are, thanks to the plan that would transform the system in less than 10 years, starting progressively from 2023 and culminating in 2031 with the total increases.

The government has created a contribution table divided into 13 brackets (as you can see below), whereby each self-employed worker will have to contribute to social security on a monthly basis the corresponding amount according to the bracket in which she is located based on the revenues generated on a yearly basis.

From 2023 onwards, contributions will start to rise gradually until they reach, in 2031, the figures shown in this table.

As we can see in this chart, we are talking about increases that would affect all the brackets except the self-employed who invoice up to €900 per month (i.e., the five lower brackets up to €17,000 per year).

The objective is to pay between 26 and 32% net to social security with the contributions of these workers.

As you can see, the increases are really notorious, so having an adequate tax optimization strategy is essential to achieve profitability as a self-employed worker. The tax and accounting team at Balcells Group offers personalized legal assistance and advice that will allow your business operations to function optimally.

You just need to explain your situation to us through the following form and we will get in touch as soon as possible: