Wealth Tax in Spain: Exact Percentages and How to Reduce it 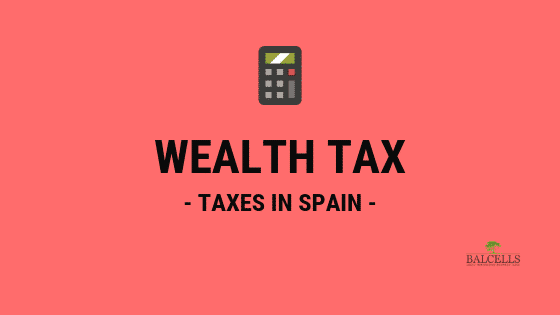 Taxes per se are really painful. But maybe the wealth tax is the winner in that sense. It seems really unfair to build your wealth just to get it taxed afterwards. Nevertheless, this article may help alleviate the situation. We will first go through the main Spanish wealth tax percentages. Then, we will move to the main optimization strategies that will enable you to save money and avoid its payment.

What is the Spanish Wealth Tax?

The wealth tax in Spain (also known as “impuesto de patrimonio”) is a tax that both residents and non-residents must pay on their assets. It was reintroduced during the financial crisis in the country, and it is a tax that must be paid on top of other ones like the income tax or the capital gains tax.

Many foreigners are surprised when they find out that they need to pay this percentage. And that is because it is somewhat unique. For example, there is no such equivalent thing in the UK.

We are talking about an individual tax that must be submitted individually, each year. There is not the possibility to do it jointly with your partner or spouse.

How is Wealth Tax charged?

As with many of the taxes paid in the Spanish territory by foreigners, there are some differences when it comes to residents and non-residents.

On the other hand, this tax is applied to the net amount of your worldwide assets if you are a tax resident in the country. For non-residents, it only applies to the net assets possessed in Spain.

Find out here whether or not you are a resident for tax purposes in this article, which will be very useful to understand the following sections.

Nevertheless, not all types of assets would be taxed here. You will pay for your real estate properties, for your savings, cars, jewelry, pieces of art (even though there are some exemptions here), boats and other investments.

And which are those assets that won’t be levied on?

You won’t have to pay wealth tax on any household contents apart from the ones the mentioned before (like art), on shareholdings on family companies, on commercial assets, on intellectual property rights or on pension rights, just to mention a few. 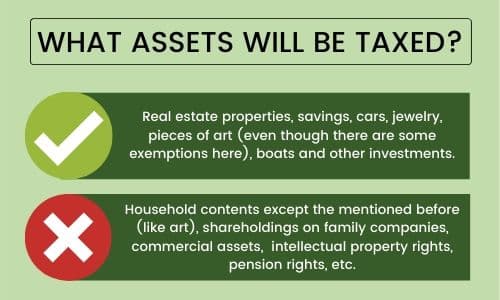 Who is liable for the Wealth Tax return in Spain?

As we mentioned in the previous section, both residents and non-residents are liable for the wealth tax. Nevertheless, that will only happen if their total assets are worth more than a certain amount, as there are some allowances.

No matter if you are a tax-resident or not in the Spanish territory, you will have a tax-free allowance of 700.00€.

In Catalonia and Extremadura, that allowance is even higher, 500.000€. On top of that, and provided that you are a resident taxpayer, you will also enjoy an additional 300.00€ allowance for your own property.

On the other hand, in other communities it is less, as in Aragon which is equivalent to 400,000 euros.

This helps us solve the question regarding if you are liable to the wealth tax or not.

If you have assets which value is lower than the possible allowances (that depends on your resident status), you don’t need to worry about paying the Spanish wealth tax. But, if the assets are valued higher… you will have to pay.

But, how much exactly?

Which are the exact percentages for the wealth tax?

This is where we find the first difference among Spanish regions. Because some regions follow the general-national rule, and some others apply their own. Which are those exact differences?

The general rule would be to tax from 0.2% to 2.5% depending on your overall wealth. This means that the larger your wealth, the more you will have to pay. The wealth tax is a progressive tax. In the table below you will find the applicable state scale: 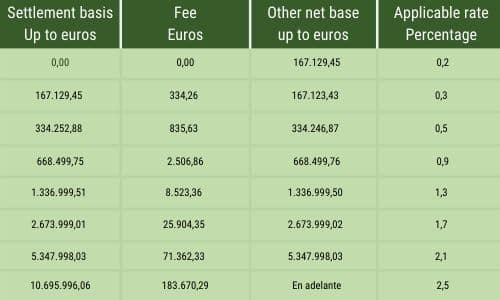 Nevertheless, there are certain Autonomous Communities in Spain that can charge a greater percentage; like Catalonia, Valencia or Andalucía.

Let’s see the percentages of wealth tax according to the Autonomous Communities:

But not all are bad news. Because regions also differ when it comes to allowances. For example, in Madrid there is a 100% allowance, meaning that you don’t need to pay wealth tax. And in La Rioja, the bonus is 75%.

Important note. Even though there are some differences depending on the region you are located in, that only hold for resident taxpayers. If you are a non-resident, no matter where your assets are located, the general rule will be applied to you.

Which is the asset value that the Wealth Tax considers?

This is a crucial issue, but not a straightforward one. And it is something you should really know; because it is not the same paying 2.5% of 500.000€ than 2.5% of one million.

Therefore, the value of the assets you will need to apply the wealth tax percentage to will be the highest of:

Nevertheless, there are some deductions to be made here. You can deduct the value of the loans and mortgage debts from the net value of the assets. But that is something you will be able to do as long as those loans have not been used to buy or to invest in any kind of asset that is exempt from the wealth tax.

This also applies to those loans used to buy a property which value is under the main home exemption (under 300.000€).

How is it calculated?

It is really simple. You just need to take the net value of your assets (worldwide assets if you are a resident in Spain), which means that you have to substract the applicable loans and just consider the amount above the personal allowance.

Then you apply the exact percentage according to the region in which you are living in, and you have the calculation done.

Apart from Spain, this tax must also be declared in Switzerland, Norway or Liechtenstein. In Norway, this tax is only declared from 1.5 million crowns, equivalent to 150,000€, and the percentage is 0.85%.

On the other hand, there are countries that have eliminated the tax on wealth, such as Sweden, Luxembourg, Denmark, Germany and Austria or more recently France.

How to reduce the Wealth Tax percentage you need to pay

This is something that will really interest you. How to lower the percentage you have to pay regarding this tax (or even eliminate it)? There are two options here:

When do you have to pay the estate tax?

This tax must be presented to the Tax Office by submitting form 714. The advantage of this tax is that it can be done online.

Like personal income tax, this tax must be filed between April, May and June. And, usually, it is due until the last day of the previous year. That is, on December 31st. So you must include the value of the assets on that date in your return.

Taxes can be a really complex issue, especially when you are from a different country in which taxation works completely different. That is why planning is essential.

But we are here to help you out. We will be your online wealth tax calculators. You just need to send us an email including all the relevant information, and we will send you the exact rates you need to pay and how to optimize your wealth tax payments.

Relying on specialized tax lawyers in Spain that can help you out with your taxes is crucial. Our team, which is specialized in expat taxes is ready to help you out. You just need to send us an email detailing your specific situation and country of origin, and we will answer all your doubts as fast as possible!

I NEED HELP MANAGING MY TAXES IN SPAIN