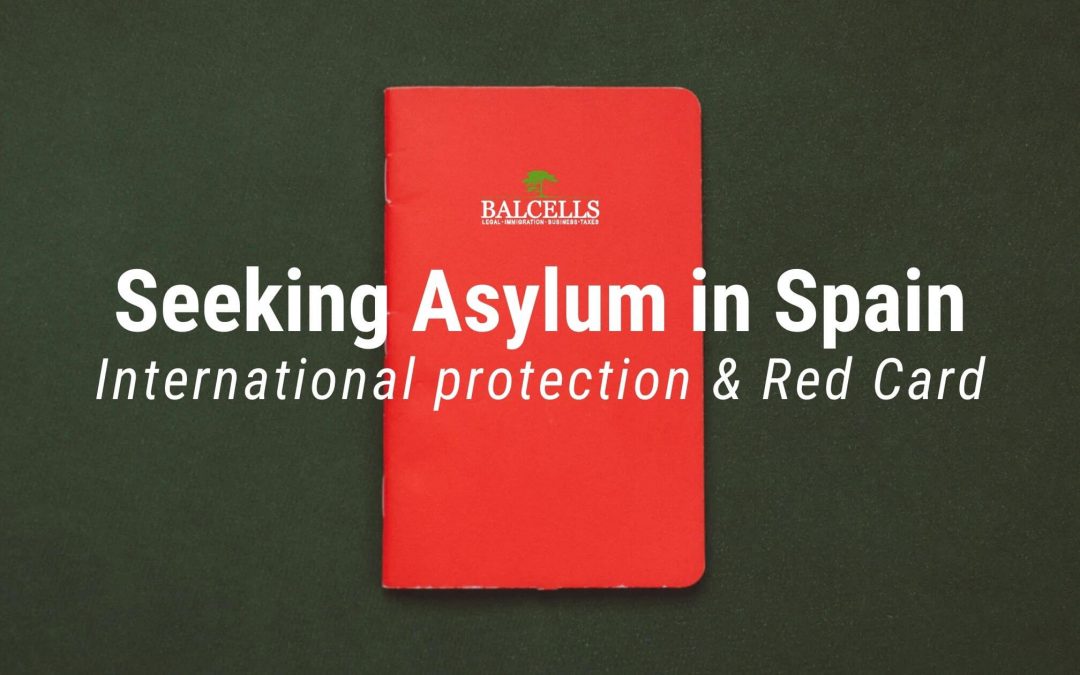 Many foreigners have doubts about how the international protection process for refugees works. They do not know where the initiate the procedure, how long does it take, or what rights they will have once they get it. In this article you will discover everything you need to know to successfully apply for asylum in Spain. In addition, we will analyze the main reasons for denial and what to do if your application gets rejected. So if you want to know how to live and work in Spain as a refugee… keep reading!

In order to give you a clear idea of how the Spanish regulations work for asylum seekers, let’s start by defining the possible paths you can follow depending on your personal situation.

First of all, we find the refugee status, a condition granted in case of being persecuted for belonging to a certain social or sexual group, for religion, race, nationality, or ethnicity reasons. These refugees will be granted the right to asylum after their application procedure.

On the other hand, there is subsidiary protection, if human rights are violated in the applicant’s home country (e.g. through torture or inhuman treatment) or death penalty exists and the foreigner’s life is in danger. If any of these conditions are present in the country of origin and therefore the applicant cannot return, he/she must apply for subsidiary protection, something that usually occurs in countries in warlike conflict.

If you don’t know exactly which of the two types of protection you should apply for, don’t worry; that is not a problem.

Generally speaking, you will always apply for your refugee status, and in case it is not granted, the next step would be requesting at least subsidiary protection.

So, what rights do get as a foreigner under international protection in Spain? Basically the following:

What are the benefits of political asylum in Spain?

Applicants for asylum will be able to enjoy several benefits, even if the resolution has not yet been granted. More precisely, these are the 5 main benefits:

Let’s understand how the application process for obtaining asylum works, since fully knowing its steps will be key to staying in Spain for the long run.

First of all, there must be a foreigner who is persecuted in her country for religious, political, or ideological reasons, for belonging to a certain ethnic group, or who is being threatened. In other words, for different reasons similar to the ones defined, there is a foreigner who is fleeing from her country of origin and traveling to Spain.

Within 30 days after arriving and entering the country, they can (and should) apply for recognition of international protection, something that is done at the nearest police station after making an appointment online. It is important not to wait more than this month to avoid an application rejection.

On the day of the appointment, you will have to explain your current situation through an interview.

This is when the process varies according to the region/city, because depending on the number of applications the office usually handles, the interview may be longer or shorter. However, in general, it won’t be a deep questionnaire, and in some cases you will simply be asked to fill out a form.

Nevertheless, it is very important to explicitly detail all the reasons why you are in a situation to seek asylum through that interview, the more proof and details the better.

Each case is assessed individually,  and the authorities will carefully try to find if there are indicators of a real violation of fundamental rights or a situation of persecution/war.

We recommend you to provide any type of document that justifies your situation.

In the event that all the details you provide are well-founded, the asylum or refugee application is admitted for processing (i.e., the process of study does not yet begin, but is first admitted to being studied).

The files will be evaluated by the Asylum and Refugee Office (regardless of where you submit them), and the decision will be made by the Ministry of the Interior.

In this initial part of the process, the applicant will be given a provisional red card, so that she can legally stay in Spain while her application is being resolved (as this can take up to 2 years).

This red card is not a residence permit. Although it allows the foreigner to live and work in the country, it has certain limitations, such as the fact that it does not allow her to leave Spain.

After this resolution process, the asylum or refugee status is finally granted. Then the foreigner is given a residence card (different from the red card), with the added nomenclature of asylum or international protection.

Where can I apply for international protection?

As mentioned above, this procedure is usually initiated at the nearest police station after making an appointment.

You can do it through this link, selecting your province and then the option “POLICIA – SOLICITUD ASILO”.

However, it can also be done at any Asylum and Refugee Office (OAR), or at any Internment Center for foreigners.

On the other hand, if for any reason you cannot enter Spain and you are stuck at the border, it will be at the border post itself where you will initiate the application.

It is very important that you start the process in the first country you arrive in. In other words, let’s take an example. You cannot enter Europe from France, and then travel to Spain to start the application. In that case, you would apply for asylum in France.

When should the application be initiated?

This question is of real importance. You must start your asylum application during the first 30 days after arriving in Spain.

If you wait for more than that, your application will most likely be rejected, so we recommend you do it as soon as possible.

What to do if my asylum application gets rejected in Spain?

It is very common for asylum applications to be rejected. For this reason, we recommend you to first understand what are the main reasons for denial (below) to avoid making any kind of mistake.

Among the most common causes we find:

Regardless of the country of origin, the most common thing is that your application for asylum or international protection is denied, especially for the last reason listed above.

What to do then? You have three different options depending on your personal situation:

How long does political asylum last?

Once you attend the police office to start your asylum application and pass your interview, you will be given a red card with a duration of 6 months.

This card is granted so that you can legally stay in Spain while the administration evaluates and processes your asylum application.

However, it is usually the case that after these first 6 months you won’t have received a resolution yet (either favorable or negative), as it is a rather slow procedure.

In that case, you can renew your red card for another 6 months.

Remember that if you have any doubts, our specialized immigration lawyers will answer them all instantly: