Inheritance Tax in Spain for Expats: Exact Rates and Allowances 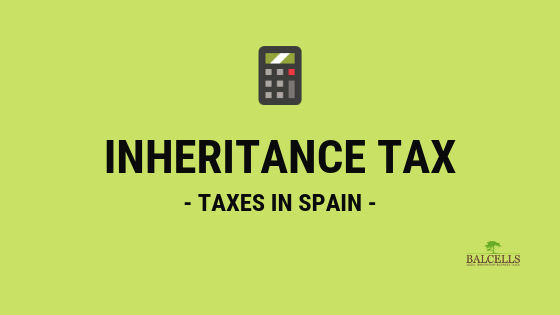 Maybe one of the most complex taxes in the Spanish taxation system. How much inheritance tax should you pay? The answer depends on many factors, and planning here will be essential to avoid paying extra money. But in this article we will solve all your doubts. We will go over the main exact rates of the inheritance tax and how to optimize it.

If you are in one of the following situations:

Then this article will really help you out. We will talk about what is the inheritance tax and if it is applicable to you (it will), the exact tax rates, how to pay it, and how to avoid paying it twice.

Without further due, let’s start.

What is the inheritance tax in Spain?

The inheritance tax, also called successions tax (or “impuesto de sucesiones y donaciones” in Spanish), is one of the main taxes paid in Spain by both residents and non-residents.

We are talking about a progressive tax paid by the individual who receives an inheritance from a friend or relative; being a property, money or any other kind of asset.

Even though an inheritance is the most common object of this tax, there are two other conditions in which it will also apply here. Whenever you accept a donation or you perceive a monetary amount stemming from life insurance of any kind, you will also have to pay inheritance tax.

In that sense, you won’t be able to receive the inherited asset/s until you pay the whole amount.

For that, you will have 6 months with the possibility to request an extension of 183 additional days. Bear in mind that you can also request to realize the payment by installments.

There are two factors that can explain the difficulty of this tax: the differences with other European countries and the different laws that are applicable within the same region.

Hence, it is worth mentioning that if you are from the UK, you will notice slight differences.

There, for example, this tax enjoys an exemption when it comes to your spouse. That does not happen in Spain. Here, after the death of one of the two members of the couple, the surviving one will be required to pay inheritance tax for the worldwide assets she or he receives.

That is why fully understanding how this tax works will be essential. And that is what we are going to do from now on.

The inheritance tax is regulated by the Spanish Civil Code. And this can only mean one thing: it will really depend on the region or Autonomous Community you are in. The exact rate and allowances will vary according to the concrete regional dispositions and legislation.

Nevertheless, there were the regional law can’t be applied, the national one will prevail.

Why? Because, in fact, the National Government in Spain is the institution in charge of defining the specific tax rates and allowances. Nevertheless, each Spanish Community has the right to modify them.

In that sense, if you are an habitual resident in any Spanish region, meaning you have lived there for more than 5 years, the inheritance regional law will apply to you.

But in case that a) you are a non-habitual resident or b) you have a property in Spain but are a non-resident, the State law will be applied to your case, regardless of the area you are located in.

Who should pay the inheritance tax? Differences between residents and non-residents

The inheritance tax must be paid if the heir is a resident in Spain and receives an asset from abroad, or if the assets that are given are in the Spanish territory.

This means that both residents and non-residents are liable to this tax. And, in fact, they will enjoy the same rates and allowances.

In the past, the law was different for both groups. Non-residents could end up paying up to 80% more of inheritance tax for the received assets.

Nevertheless, after a new law that came into force in 2015, the situation completely changed. Now the law can’t be discriminative: it is applied to both residents and non-residents equally.

Before starting to give exact percentages, bear in mind that the actual number you will end up paying is 100% dependant on your situation. It mainly depends on the exact relationship with the deceased, the region you are located in, etc.

This exact number is calculated using a complicated formula that takes into consideration several factors such as your age, residency, relationship with the deceased, etc. That is why our advice is to contact us and explain your specific situation so we can give you an exact number.

You can do it by sending us an email at info@balcellsgroup.com and we will get back to you in a couple of hours.

As a good rule of thumb, the closest to the deceased, the less you will end up paying. And that holds both in regards to the exact percentage to be paid, and the allowances you will be able to enjoy.

How much inheritance tax should you pay?

We are going to give you the tax rates that the national law establishes:

But wait for a second: that is not the final amount you will end up paying: there are several allowances that surely apply to your case.

This is the favorite part of nearly everyone: the exact amount of money you can avoid paying.

The inheritance law has changed recently, and in this case to worse. Before, you could reach nearly a 100% tax allowance. Nevertheless, with these new updates, allowances reach a maximum of 50% in some cases.

Again, the exact allowance depends on the relationship you have with the deceased. In order to define this number we need to understand under which group the heirs are in:

*Bear in mind that each region can modify these numbers, differing then from the general rule.

This group is conformed by the children of the deceased, including adopted, who are under 21 years old.

In the second group we find children who are over 21 years old, grandchildren of the deceased, his or her parents & grandparents, and, finally, spouse.

If you live in regions like Catalonia or Andalusia, you are lucky. They recognize many unmarried partners who are registered as a civil partnership as members of this group.

On the third group, the law recognizes siblings, nieces, nephews, aunts, uncles and their descendants and ascendants, as well as in-laws.

And, finally, the last group. the one including cousins, unmarried partners in those regions that do not recognize civil partnerships, and all the other unrelated individuals (like friends).

Unfortunately, they don’t get any kind of allowance.

There are some additional cases that may go through a positive outcome anyway. Those individuals with disabilities enjoy an allowance that goes from 47.000€ to 50.000€ depending on the degree of that disability.

Furthermore, you can also be entitled to a tax reduction of 100.000€ in case you are the children or spouse of the deceased. This allowance can rise up to 156.000€ provided that you haven’t reached the age of 26.

And finally, if the inheritance corresponds to the main residence of the deceased and the heirs won’t sell it within 5 years, an additional allowance can be claimed.

How to avoid the double taxation

No matter if you are a tax resident in Spain or not, you can still be liable to pay inheritance tax in any other country, let’s say the UK.

That is something that depends on where you are domiciled.

If you are a British citizen in the UK but resident in Spain, you can be asked to pay in both countries. Hence, this creates a double taxation problem.

It will be in those situations in which it is highly advisable to rely on a team of professionals to optimize your taxes and avoid suffering from this double taxation.

But how does it exactly work?

You have two important amounts to consider:

You can deduct the lowest of the two, just in case we are talking about taxation that stems from personal liability.

How to reduce your inheritance tax payment

There are three main ways in which you can avoid paying a high inheritance tax:

As you have seen, the inheritance tax is a complicated issue for expats.

A lot of regulations, different tax rates, and allowances… Defining the exact amount to pay is complicated. And knowing how to exactly pay the lowest amount possible is even more difficult.

That is why planning is key. And our inheritance lawyers are here to help.

In that sense, at Balcells Group we offer accounting and tax planning services for expats that can really help you out with your inheritance.

Contact us, explain your situation, and together we will find a way to help you and your family with your inheritance! Fast response guaranteed.

I WANT TO TALK TO A SPECIALIZED TAW LAWYER