What is the Difference Between Marriage and Civil Union in Spain? Differences & Similarities 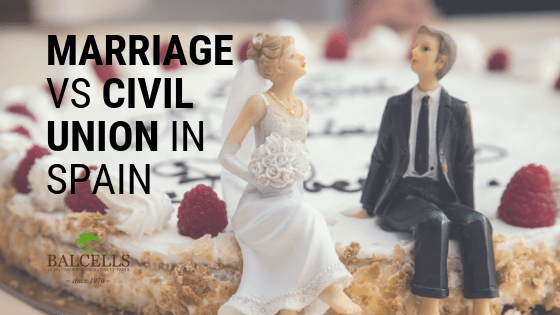 There are many situations in a couple’s life that will be completely affected by the type of legal relationship they have. Taxes, having children, pensions, breaking up…

It is then that understanding what is best for your interests will be fundamental, because choosing one way of regulation or another can imply huge differences. So, what is better, to form a civil union or to get married?

In this article, we will analyze both the differences and the similarities between a civil partnership and getting married in detail so that you can answer this question clearly.

What is best, getting married or a civil union?

Marriage and civil partnership are two legal statuses that regulates your relationship in Spain in the eyes of the Spanish government. In this sense, there are many differences and similarities among both options, and determining what is better for you will depend on each particular case and the interests of both members.

That is why in this post we will analyze the most important aspects for you to understand what each type of legal relationship actually entails.

Civil union and marriage are both regulated by the family law in Spain.

And both options will help you be better protected in many situations, like having children with your partner.

Furthermore, they will grant you the possibility to regulate the whole economic part of the relationship, which is something we really recommend.

If you are planning to face an important event in the upcoming months or years, like buying a property with your partner, starting to live together, or having children; choosing either one option or the other is something you should consider doing. But the question is, which are the main differences between Pareja de Hecho and marriage and how can they affect my decision?

As mentioned before, the two options have some shared legal aspects as well as important differences you should consider.

We will start with the commonalities.

Once you have your legal status conceded by the corresponding authority, you will be granted the right to receive the widow’s or widower’s pension in case of the death of your partner.

That is something given to marriages just after the moment of the constitution, but the competent legislation demands certain extra requirements for parejas de hecho.

In order to be granted the widow’s/widower’s pension, the civil union must have been constituted for two years before the decease, and both members must have been living during 5 years together.

In case of being married, no minimum period of relationship is required, unless the death was caused by a common illness.

If that is the case, then it will be necessary to prove that you have been married for at least 1 year.

You will be able to adopt a child. And, with some of the changes that were applied recently in Spain, nowadays homosexual civil unions do have the right of embarking on the process of a joint adoption too.

3. Measures in case of family breakdown

Both members of the relationship will enjoy the same rights and obligations in regards to their common children in case of a family breakdown.

Many people have doubts regarding this, and hesitate between both types of relationship simply because of the consequences it may have for their children.

However, there is no practical difference, the obligations as parents are exactly the same in both cases.

Just as a note, it is not easier to get married after having a child: the requirements are still the same.

4. Both are means to get the Spanish residency

Once you have constituted your civil union or your marriage, getting the residency in Spain is really simple.

Why? Because now that your partnership is officially registered, and provided that one of the members is not European, she can get the residency card as a family member of an EU citizen.

Therefore, under the immigration scope, it does not matter if you choose marriage or a “pareja de hecho”.

Both are a gateway to a residence and work authorization in the country.

However, as we will see in the following section, there would be important differences in terms of obtaining Spanish nationality if you have obtained your EU family card through one way or the other.

Do you have any doubt so far? Ask us anything here and get an instant answer:

Main differences between civil partnership and marriage in Spain

Even though they can be very similar in many ways and imply the same rights, constituting a Pareja de Hecho or a marriage in the Spanish territory also poses some differences. Understanding these discrepancies will be key in your journey to better defining what best suits your current needs.

This is one of the main differences as it is the one that determines the upcoming ones.

The civil union and the marriage are not regulated by the same codes and laws in the Spanish territory. Whereas the latter is regulated by a statal law, the Spanish Civil Code; the former from the corresponding regional code.

For example, civil unions in Barcelona and Catalonia are regulated by the Catalan Civil code.

This has many important implications, as depending on where you live, opting for the marriage can be more beneficial than the civil partnership. This is why we advise you to contact us in order to further analyze your situation and determine like that the path that best adapts to your concrete situation.

If you live in Catalonia, we really suggest you read its Civil Code, as it is just 2 pages long and it clearly explains all the obligations that each partner will have once the Pareja de Hecho is registered.

Why do we recommend this?

Because there are many conditions that you may not be expecting, like the need for one of the two members to provide food to the other one if this last one is not currently working.

The distinction in terms of the application and constitution process may really interest you, especially if you are an expat or foreigner living in Spain and wanting to constitute a legal relationship.

It will take just 15 minutes on the notary for you to have your Pareja de Hecho, whereas it can take from 1 to 6 months to finally have your marriage registered.

And, as we have mentioned, foreigners may have it much more complicated, because the competent authority will require from them a lot of documents from your country of origin.

If you want to save time and have your partnership settled fast… go for the civil union.

Nevertheless, it is true that marriage just requires the consent of both members on the notary (and with 2 witnesses) in order to proceed. Pareja de Hecho, apart from that, may also require that you and your partner have lived together for a minimum period of time (which could be 1 or 2 years depending on the region in which you are currently living).

Anyway, here you will find a complete guide on how to get married in Spain step by step, which will help you understand the whole process.

One of the main benefits of marriage that a civil union won’t grant you is the possibility to do joint taxation.

That is, formalize your yearly income tax declaration together with your spouse.

This will, for sure, save you and your partner a lot of time (as well as offer several tax benefits).

If you constitute a Pareja de Hecho, both members will need to do their individual taxations separately.

4. Compensation in case of breakdown

What happens if both members decide that their relationship is over?

In that case, and if the relationship constituted was a marriage, the unfavorable member of the two will have the right of compensation from the counterpart. In 100% of the cases.

In the case of a civil union, just some regions have written in their civil codes this right, thus accept it.

In those regions in which there is no right to compensation pre-established, it will be a judge who must agree on the right of compensation during a trial (being a much longer and tedious process, which usually ends up with a rejection).

In the situation in which marriage has been constituted, there is an implicit right for the inheritance.

On the contrary, civil unions do not have this right intrinsically.

That is why if you have formalized your civil partnership and want to ensure that your partner receives an inheritance in the event of your death, you will need to legally specify it by drafting a will.

Bear in mind that receiving an inheritance represents paying the corresponding successions and donation tax.

Depending on whether you have constituted marriage or civil partnership with your partner, the exact percentage and allowances will differ.

What happens during the days after you get married or have registered your partnership? Are you entitled to days off to celebrate?

In the case of marriage, yes. You have two weeks (15 days) of vacation.

But the opposite path is not so favorable.

If you have constituted a civil union in Spain… you are not entitled to vacations; unless the applicable labor agreement specifies otherwise.

When is the affective relationship considered terminated?

In the case of marriage, it is terminated when one of the spouses dies; or after the first three months that come when the divorce is requested by one of the two members of the relationship.

The important thing to consider is that both members of the relationship must give their consent for the marriage to be effectively terminated.

As for the civil union, the situation is somewhat different; as it is much easier to terminate this contractual relationship. The civil partnership will be terminated in the following cases:

Just by choosing one of the two options will you be able to explicitly regulate the economic regime with your partner.

That is to say, to determine how exactly your possessions and earnings will be distributed in terms of legal ownership.

In Spain, there are two possible economic regimes: separation of property and community property.

And while it is true that in the marriage you can choose between one or the other, in the civil partnership there is no such option; and the separation of property will be applied (whereby all assets and debts acquired by any member of the relationship will remain as their individual possession).

You can learn more about what both options imply here.

As we have mentioned in the similarities section, both types of legal relationships are equally valid to obtain the family member of an EU citizen card.

However, if you want to apply for Spanish citizenship, you will face an important difference.

If you get your residency because you have married a Spanish citizen, then you will be able to apply for Spanish nationality by residence only after one year of living in Spain legally; is what is called citizenship by marriage.

This is not the case if you have formalized a civil partnership, which would mean that you would need to wait the general time (without any kind of temporary reduction), which is 2 years for Latin American countries (besides Portugal, Equatorial Guinea, Philippines), and 10 for the rest.

This have been the main differences between both legal paths. As you can see, there is no option better than the other one, and choosing marriage over a civil union will only depend on your current situation and what you value the most.

For any other specific doubt regarding any of these points, do not hesitate to ask in the comment section down below, we will be glad to help you!