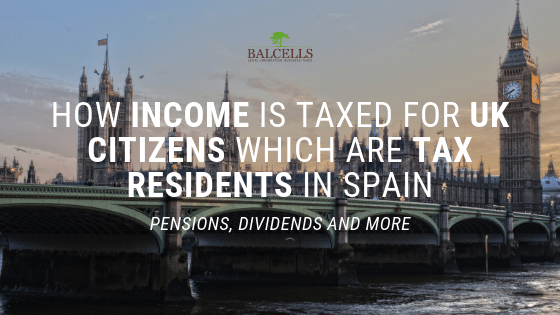 After so many questions from our United Kingdom clients, we nearly felt it was compulsory. We felt it was necessary to create the blog post that would once for all solve all their doubts. Because income tax can be one of the most complex taxes in Spain. So much so, if we take into consideration the double treaty conventions between other countries the situation is even worse. That is why today we are going to cover how income is exactly taxed for UK citizens that are tax residents in Spain. You will learn what should you pay for and which concepts are exempt from the income tax in the Spanish territory.

What are we going to see exactly? We will carefully analyze if the following incomes are taxed in Spain or in the UK:

Content hide
1 Quick reminder: difference between being a resident and a non-resident taxpayer
2 Income tax for UK citizens who are tax-residents in Spain
2.1 The Hispanic-British convention
2.2 1. Dividends
2.3 2. Interests
2.4 3. Capital gains
2.5 4. Are UK pensions taxed in Spain?
2.5.1 Public pensions
2.5.2 Private pensions
2.6 5. Real estate and income gains
3 The 720 model and declaring your rights & assets in the UK
3.1 Get tax assistance here

Quick reminder: difference between being a resident and a non-resident taxpayer

Everything we will cover in this blog post is going to be addressed to UK citizens that are residents in the Spanish country. Therefore is really important you understand the main difference. You will be considered a tax resident in Spain provided that:

If you meet one of these requirements, you are regarded as a fiscal resident in the country. Hence, the taxes you will need to pay will differ from those for non-residents, as the percentages for the ones that both groups have to pay. You can learn about all the taxes that residents and non-residents have to pay here.

Income tax for UK citizens who are tax-residents in Spain

As a resident in Spain, you will need to pay income tax (IRPF) for the worldwide income you obtain. Meaning that both earnings you get in Spain and in any other country will be taxed.

But what happens if you generate some income in the UK and you are taxed there? Will you be taxed again in Spain? You don’t need to worry about that. Because, as with many other countries, Spain has double treatment conventions that avoid double taxation issues. Furthermore, and as we will see in the upcoming sections, there are several concepts that are just taxed in one country or in the other.

As for the tax year, it equals the calendar year (from the 1st of January to the 31st of December). And you must file the income tax declaration during the months of April and June for the previous year.

So, let’s analyze in more depth what happens with all the incomes that a UK citizen obtains in his origin country while being a tax resident in Spain. And that is something that is nowadays regulated via the Hispanic-British convention from the 14th of March of 2014. It exactly regulates how each kind of asset is taxed:

What happens with the dividends you obtain because you bought shares of a company?

Well, there are two possible situations. One the one hand, dividends that are obtained in the UK can be taxed in Spain. Nevertheless, they can also be levied in the United Kingdom, provided that the company paying them is from this country.

Then, if dividends are taxed in the UK and you, the one receiving them, are a tax resident in Spain, the income tax in the UK will be taxed on the gross amount of dividends until a limit of 10 or 15%. The resident taxpayer will have the right to apply for the double taxation exemption until that limit, paying just the rest until the IRPF percentage that is effectively applied to her in Spain.

If the dividends are initially taxed in the UK or directly in Spain is something that will depend on the internal legislation of each country and to the specific situation.

This is an easy one.

If you obtain interests in the United Kingdom (let’s say, for example, from a loan or bond), those will be just taxed in the Spanish territory. That, remember, provided that you are a tax resident in Spain.

In order to talk about capital gains and how they are taxed regarding the income tax, we need to make a distinction based on their origin. The following 4 types are those that can be taxed both in the United Kingdom and in Spain, giving the possibility to the taxpayer to apply the international double taxation deduction:

Incomes that originate from the disposal or sale of any other asset that differs from the ones mentioned in the previous 4 points will only be taxed in Spain.

Furthermore, the Hispanic-British convention also enumerates other types of wealth incomes like public functions, remuneration for your work as an artist or athlete, etc.

4. Are UK pensions taxed in Spain?

This is, for sure, one of the incomes that most UK citizens have doubts about. The taxation of pensions in the Spanish territory for tax residents depends on whether they are public or private:

A public pension is that which is conceded to those citizens who provided services to the Government, to any of its departments or subdivisions or to a local entity. It is the pension for public officers. And there are two possible scenarios:

All the incomes generated from the possession of a property in the United Kingdom can be taxed both in Spain and in the UK. Again, the fiscal resident has the right to apply the international double taxation deduction so she does not pay the same percentage twice for her income tax.

The 720 model and declaring your rights & assets in the UK

Finally, there is something you must bear in mind.

Because yes, you will need to file the income tax once per year in order to declare the incomes you obtained worldwide so you can pay the corresponding IRPF. But, as a tax resident in Spain, there is one step extra.

And that is filling the model 720.

Through this document, submitted on a yearly basis from the 1st of January to the 31 of March, you will need to declare to the Spanish Tax Agency all the assets you possess in the UK. What does it mean? That you should clearly state in that model the possession of the properties you possess worldwide, accounts in financial institutions, and other similar rights and assets, if applicable.

And this is something that you must do provided that the total value of assets in each category is higher than 50.000€.

Failing to do so will involve a severe economic penalty.

Do you need help filing your income tax return and your asset declaration, or clearly defining if you should pay for a specific asset in Spain or not?

Then let our tax lawyer and accounting team help you out. We will provide you with the tax advice that you need.

I want to talk to a tax advisor