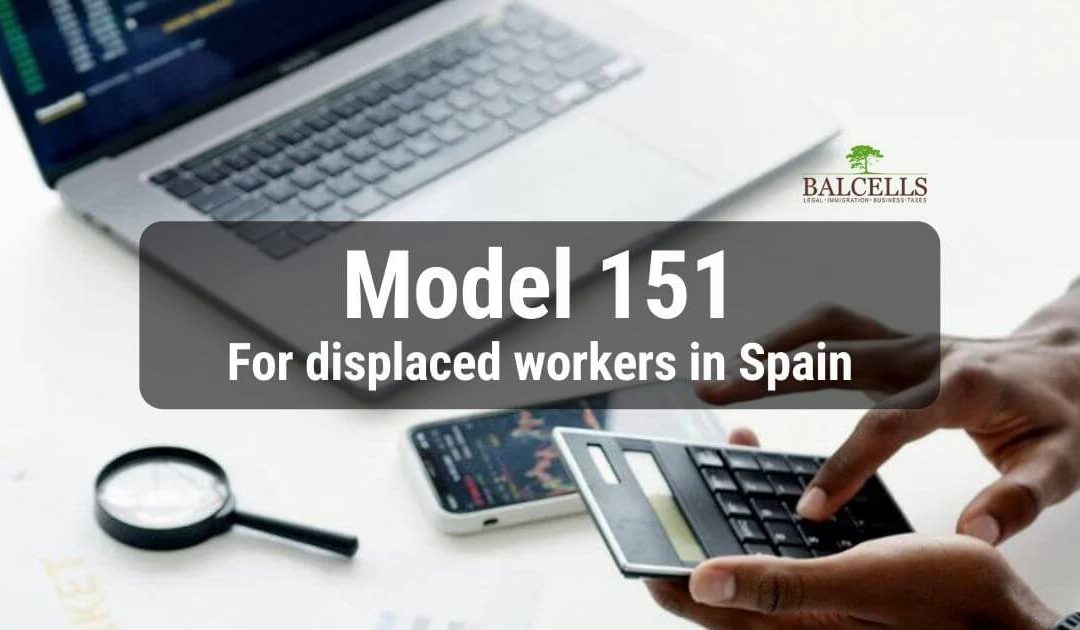 Many foreigners in Spain benefit from the special tax regime applicable to displaced workers through form 149. Specifically, one of the main benefits of this regime is the possibility of filing their tax return under form 151, with the tax reduction we will see below. In this article we explore everything you need to know about how this special tax return works, answering all the main questions you may have right now.

Content hide
1 What is Form 151?
2 Requirements to declare your income through form 151
3 How and when should you file this special tax return?
4 What income will be included in form 151?
5 And what income is NOT included?
6 Is it possible to make a joint declaration with the family unit?

Once a year, all citizens in Spain must file their tax returns.

This means communicating to the Tax Agency which have been all the sources of income and the different amounts obtained throughout the year, in order to pay (or receive back) the corresponding tax amount.

After calculating the total income and subtracting deductions and allowances, the citizen must pay a percentage of the result, a percentage that grows progressively according to the level of income obtained (which moves from 19 to 45% approximately). You can discover the exact tax rates here.

However, many foreigners can benefit from a special regime as displaced workers, also known as Beckham Law, which allows them to pay a fixed tax rate of 24% (up to 600,000 euros) instead of the progressive rate that would grow with their income (and that could reach up to 45% in the highest bracket).

In case of being able to benefit from this particular scenario, they will not file their income tax return through the general form, but they will do it through this special form 151.

Thus, form 151 is the form to be used by foreigners who benefit from the Beckham Law when filing their anual income tax return.

Requirements to declare your income through form 151

Who can benefit from (and should use) this form 151 to declare their income?

We are basically talking about foreigners who start living in Spain due to a working relationshio (either because they have received a job offer in the country or because their company has assigned them to this country) and that:

As we have commented, through this regime the foreigner will pay a fixed rate that will be lower than in the general case, and this regime will last for 5 years.

Thus, this group of foreigners will be obliged, once a year, to declare their income through this form.

How and when should you file this special tax return?

Displaced workers must file form 151 and therefore submit their special income tax return by the 30th of June of the following year at the latest.

The filing is quite simple, as it can be done completely online on the website of the Tax Agency.

You simply need a digital certificate or Cla@ve PIN.

However, where we can find more complications is at the time of completing the model correctly, understanding which deductions are applicable to the particular case, and which items should be included.

You can find here all the details and start your online submission through the Tax Agency’s website.

However, the most advisable thing is to have a team of tax experts guide you step by step and assess your situation. At Balcells Group we help foreigners under this special regime as displaced workers on a daily basis, so we will be happy to answer all your questions online:

What income will be included in form 151?

Once it is clear to you that you will have to file form 151 and you know when to do so, the next key point is understanding exactly what income will be included in it and for which you will have to pay taxes.

In this sense, foreigners to whom the special regime applies as displaced workers, must declare and pay tax on the following types of income:

However, these incomes must have been obtained in Spain. Otherwise, they would not be included in this form 151 and would not need to be declared.

However, we find the exception when it comes to the salary, which must be included regardless of the country of origin.

And what income is NOT included?

On the other hand, it is equally important to understand what income can be excluded from this declaration.

That is, what can you deduct to end up paying less.

In short, there are two main groups of items that you can deduct:

Is it possible to make a joint declaration with the family unit?

It is very common, and often beneficial, to make a joint tax income return with the different members of the family unit.

However, with this special regime, this is not possible, and the only way to file form 151 is independently and individually.

Thus, personal circumstances will not be taken into consideration in these cases.

While this is one of the main disadvantages, there are many other deductions and allowances that will allow you to end up paying less.

The important thing is to know which of these apply to your particular situation. If you would like to know them in detail, do not hesitate to explain to us your situation in detail so that we can offer you personalized tax assistance:

I want to talk to a tax lawyer