Beckham Law in Spain: How to Save Taxes as a Foreigner 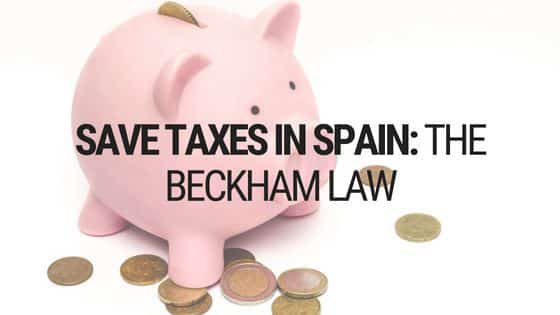 If you are moving to Spain to work, this will really help you out. Because there’s nothing worse than taxes. But fortunately for all expats, the Spanish tax system creates great opportunities to save some money. And that is what we are going to explain throughout this article: a special tax regime that can help you avoid paying taxes in the Spanish territory. So let’s dive into everything you need to know about the Beckham Law in Spain and how to easily apply.

Content hide
1 What is the Beckham Law?
1.1 Taxes for foreigners in Spain before and after the Beckham law
1.1.1 Before
1.2 All the tax reductions under this law
1.2.1 Inheritance and Donations tax
1.2.2 Capital gains
1.2.3 Property tax
1.3 Taxation of Worldwide Income
1.3.1 Be careful: double taxation agreements won’t exist
2 Who can apply for this special tax regime?
3 Main Requirements for the application of the Beckham Rule
4 How to apply for the Beckham Law
4.1 Get legal assistance from our tax lawyers

What is the Beckham Law?

The Beckham law in Spain is a special tax regime that enables foreigners who move to the Spanish territory to pay a flat fee of 24% only on the incomes they obtain in Spain instead of a progressive tax on their worldwide incomes (19-45%).

So, basically, this special tax regime for expats make it possible to end up paying much lower taxes, hence being able to save huge amounts of money. It allows all the workers who reside abroad that want to come to work in Spain to pay income and wealth tax as if they were non-residents during the first 6 years.

This normative is regulated on section number 93 of the Spanish Income Tax Act and was published in 2004.

It was created to attract talent and qualified workers into Spain; and got its name after the famous football player David Beckham (the first one to take advantage of it).

Taxes for foreigners in Spain before and after the Beckham law

Just so you can understand how much you can benefit from this tax rule, let’s see which was the situation of foreigners before it’s application.

Until 2005, all foreigners who moved to Spain and spent more than 6 months (183 days) per year in the country became tax residents.

As we carefully explain in our article about all the taxes that any foreigner resident must pay in Spain, when you become a resident two things happen:

Nevertheless, after the Beckham rule came into play, things changed completely. Now expats can pay much less during their first 6 years in the country. And they can save taxes provided that they apply for this regime, because:

So, as you can see, the Beckham Law implies, without any, doubt a great advantage for tax savings, as the flat tax rate of 24% is much lower than the rates that Spanish residents do face, which can rise up to 45%. A reduction of 21%!

All the tax reductions under this law

This regime won’t just benefit you when it comes to the income tax. There are other applications that will help you optimize your taxes further.

As the applicable tax is the non-resident tax, this transfers to the inheritance and donations tax as if the individual was a Spanish resident.

Capital gains are not exempt either. Dividend gains, as well as profits obtained through the sale of both movable and immovable properties, will be charged at a variable rate that ranges from 19% to 26% depending on the base amount.

Nevertheless, bear in mind that capital gains obtained outside Spain must be still paid to the corresponding country following their taxation rules. Not having to pay in Spain all those incomes obtained abroad does not mean they are not taxable elsewhere.

Under this special regulation for foreigners, property tax will only be applied to properties held in Spain. Therefore, a wealth tax in a portfolio of 3 million will only amount to approximately 1.79%.

If you want to learn more about the Spanish taxation system, do not hesitate to visit our guide regarding the Spanish tax system and which are all the taxes paid in Spain.

But the Beckham rule presents additional advantages. The worker will just need to pay for the incomes generated in Spain. This eradicates the need that tax residents have when paying taxes on their incomes obtained worldwide.

There is no denying the fact that this is a completely benefiting point. You will be able to diversify your sources of income and investment so you pay the lowest possible amount. Therefore, apart from reducing the taxable amount, this possible diversification will help you reduce risk.

For more information regarding how does the worldwide income taxation work, do not hesitate to visit our blog post in which we specifically target everything related to the income tax.

Even though this regime will really benefit you, there is one important downside. You won’t be able to benefit from double taxation agreements.

Because, as we have said, you will become a non-resident for tax purposes. That is why you can’t eliminate double taxation issues: the tax residency that is required for that won’t be granted to you.

Who can apply for this special tax regime?

Basically, any foreigner who moves to Spain and is under the following rules can apply:

Conversely, the following individuals are excluded:

Main Requirements for the application of the Beckham Rule

How to apply for the Beckham Law

Finally, let’s move to another crucial aspect: the application process.

It must be noted that the application needs to be submitted within 6 months starting from the date of the inscription in Social Security as an employee for the Spanish company. Doing it afterwards will imply getting a denial.

In order to star benefit from this regime, you must inform the Spanish tax agency by filling out and sending the model 149, which you can find here. Furthermore, you will also need to include:

From then on, you will be able to benefit from this rule for a total of 6 years. During each of them, you must yearly formalize your non-resident tax declarations using the model 151.

Get legal assistance from our tax lawyers

If you are an expat who is moving to Spain to work and wants to save taxes… Then you can (and should) welcome the Beckham Law.

Summing up, this regulation allows tax reductions of up to 20% in your incomes, in addition to a reduction of up to 5% in dividends, and the potential for reducing the wealth tax (depending on the characteristics of taxation in the country of origin).

And, if you need legal assistance from our tax lawyers, let us help you out! We will manage the whole Beckham law application so you can start saving taxes as soon as possible. Besides, we will plan and advise you with your tax situation, so you can optimize and pay just what is required.

I want to start saving taxes with the Beckham Law