Which Are the Taxes Paid in Spain? Spanish Tax System 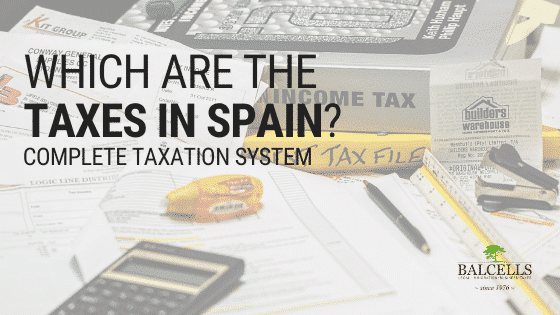 As in any economy under the Welfare State, Spain collects taxes to finance its public spending. Health, pensions, public education … these are some of the areas supported through tax collection. But, which are the taxes that are paid in Spain exactly? In this post, we will summarize all the Spanish tax rates for 2020 and we will give you some tax advice so you can optimize your taxes.

Content hide
1 ALL CITIZENS AND COMPANIES PAY TAXES
2 TAXES IN SPAIN ACCORDING TO HOW WE EXECUTE OUR ECONOMIC ACTIVITY
3 TAXES IN SPAIN FOR SELF-EMPLOYED INDIVIDUALS
3.1 PERSONAL INCOME TAX (PIT) or IRPF
3.2 CAPITAL GAINS TAX
3.3 WEALTH TAX
3.4 INHERITANCE AND DONATIONS TAX
3.5 VAT (Value added tax)
3.6 NON-RESIDENT INCOME TAX (IRN)
4 TAXES IN SPAIN FOR COMPANIES
4.1 Corporate Tax (IS in Spanish)
4.2 Tax on property transfers (ITP)
4.3 DO YOU WANT TO OPTIMIZE YOUR TAXES IN SPAIN?

ALL CITIZENS AND COMPANIES PAY TAXES

First of all, we must understand that both companies and citizens must pay their taxes compulsorily; as required by the Spanish tax regime.

Thus, the Spanish tax system is one of the most extensive in Europe, making Spain the fourth country in the entire European Union in the ranking of those with the highest percentages.

And in which way are Spanish taxes collected?

Until now, the general classification of taxes paid in Spain is divided into two types: direct taxes and indirect taxes.

TAXES IN SPAIN ACCORDING TO HOW WE EXECUTE OUR ECONOMIC ACTIVITY

However, the tax rates that each one of us pays are different, and understanding exactly what taxes are paid will be something fundamental, among other things, when deciding between developing our economic activity as a self-employed individual or under a society. The monetary difference that results from the distinction can distort our choice and make us choose one option over the other, as it can be more advantageous for our particular case.

So, let’s see what are the types of taxes in Spain according to whether we are self-employed individuals or corporations:

TAXES IN SPAIN FOR SELF-EMPLOYED INDIVIDUALS

Taxation for the self-employed in Spain during 2021 is mainly composed of 5 different taxes, direct and indirect:

The Income Tax operates on income obtained during the whole year by both Spanish residents and non-residents. In the first case (for those who stay in the country for more than 183 days per year), it is a progressive tax; that is, its percentage increases as our income goes up.

Giving the exact percentage is difficult as it is something that differs according to every region in Spain. But it can go from 18% for the lower incomes up to 48% to the largest ones in some Autonomous Communities.

How much is paid in terms of personal income tax in 2021 for non-residents? In this case, for those who are from Norway, Iceland, or any European Union country, a fix tax rate of 19% will be paid. If you are from any other country, 24%.

Bear in mind that there are some things that can be deducted from the taxable income.

In case you want to learn how and when self-employed workers must pay income tax, you can find it here.

The exact percentage depends on whether you are a resident or not:

You must bear in mind that there are some exemptions and bonifications, like the main home exemption, that will reduce or even eliminate the amount to be paid here.

The wealth tax is a percentage that goes from 0.2% to 2.5% that is applied to the value of those assets that exceed the allowance of 700.000€. In the case that the asset we are talking about is your main home, you can add an extra allowance of 300.000€. Being a resident or not won’t make any difference in regards to the eligibility to pay this tax or not. The only difference will arise from the assets that will be levied on. Residents must pay wealth tax on their worldwide assets; whereas non-residents only on those they have in Spain.

Every time a business passes into the hands of another person, whether due to inheritance or donation, the new owner must pay the inheritance and donation tax. It is a tax assigned to the autonomous communities, and there is a certain territorial inequality: there are communities in which this tax is higher than in others.

This indirect tax, the well-known VAT, charges consumption and transactions. It is not a subjective tax since it is paid according to the activity that we do as individual entrepreneurs: certain activities have it and some do not. In this case, VAT is not a differential factor between exercising as a freelancer or as a company, since it is a tax that is paid regardless of the legal form.

The Non-resident Income Tax is for, as its name indicates, the income of those individuals who do not reside in Spanish territory. That is, it applies to those people who generate income in the Spanish territory, but operate outside it. A person who lives less than 183 days per year is considered a non-resident.

If you are interested in knowing how to optimize your taxes in Spain as a non-resident… Do not miss our post about the Beckham Law in Spain!

TAXES IN SPAIN FOR COMPANIES

The collection of taxes in Spain during in regards to companies includes two extra taxes to those previously seen while maintaining the VAT:

Corporate Tax (IS in Spanish)

The Corporate Tax is a direct tax that collects a % of the result of the economic activity of a company. Unlike Personal Income Tax, it is a single tax of 25%, a flat and non-progressive rate. That is, whatever the company earns, it will always pay 25% on the benefit.

You can access here a complete guide on this tax. You will discover when and how should you file it and how to save money through its deductions.

The tax on property transfers records the different operations that take place during the life of a company, for example, capital increases or decreases, mergers, divisions, etc.

Thus, we see how the main difference between carrying out an economic activity as a self-employed or as a society lies mainly in the progressivity of the PIT vs the fixed rate of Corporate Tax.

As a general rule, although in practice there are many more factors to take into consideration (such as taxes generated by the collection of dividends), we can assume that at low-income levels it is more advisable to operate as an individual entrepreneur, while at higher levels of income, operating under the structure of a company supposes saving taxes.

Furthermore, the property transfer tax is also paid when buying a second-hand property in Spain.

DO YOU WANT TO OPTIMIZE YOUR TAXES IN SPAIN?

Now you know what are the main taxes paid in Spain, both for individuals and for companies.

If you are considering setting up a company or already have one, it is very likely that you are not optimizing your taxes and you are paying more than you should.

Do you want to know how to pay fewer taxes in Spain? Well, let us help you. Ask for an appointment with us so that our lawyers specialized in tax law can analyze your situation!

I WANT TO PAY FEWER TAKES