Oath of Spanish Citizenship Before Notary 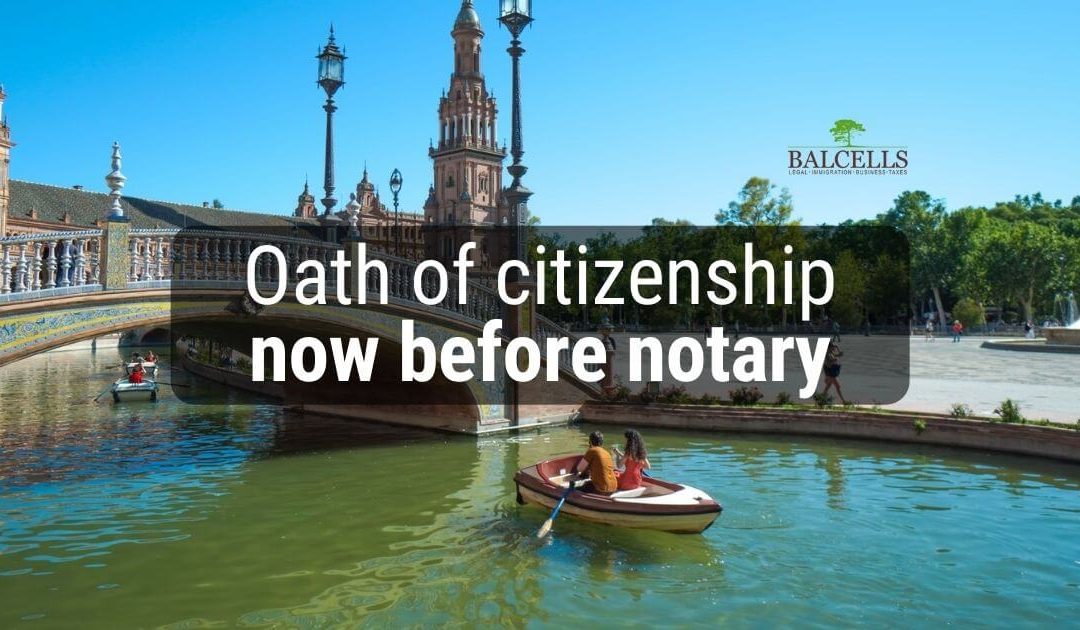 When a foreigner gets her citizenship application approved, she has a maximum of 180 days to take the oath of allegiance to the Spanish Constitution and to the King.

If the oath is not taken, this foreigner could lose her nationality, so this becomes a fundamental part of the process.

However, during the past years, this procedure has become troublesome, since the Civil Registries, where the procedure is carried out, have become completely saturated and are giving appointments on many occasions a year in the future (and the fact of getting your appointment does not stop the 180-day limit from counting, so the risk of losing citizenship is a reality).

But, finally, through in this article we are happy to announce a new measure that aims to be the definitive solution.

From now on, it is possible to take the oath of Spanish nationality before a notary, and in the next lines you will discover all the details.

Content hide
1 About the new instruction that allows taking the oath at the notary’s office
2 What are the main advantages of this new measure?
3 Will I be able to choose any notary to take the oath?
4 This is how the procedure before a notary will be from now on
5 DICIREG, the IT platform that will bring it all together
6 Will there be any extra cost?

After a long time waiting for this measure, it is finally possible to take the Spanish oath of allegiance in front of a notary.

On September 23 an instruction was published by the General Directorate of Legal Security and Public Faith (“Dirección General de Seguridad Jurídica y Fe Pública”) announcing all the components of this measure.

While it is true that it establishes that there is the possibility of taking the oath of Spanish nationality at the notary’s office and how the process will work in general (something we will detail below), we still do not know all the details.

However, this is undoubtedly great news.

But that’s not all, because you will not only be able to take the oath at the notary, but also at the Civil Registry of the different Spanish Consulates located all over the world.

That is to say, if you are granted citizenship by residency while you are outside Spain, from now on you will be able to take the oath without having to return to the Spanish territory, since you will be able to carry out the complete procedure at the consulate.

This new measure is something that goes hand in hand with the current shock plan that is handling nationality files in a much faster way.

The problem that we often find with shock plans is that although they resolve files very quickly, those same files tend to get stuck later on in the oath phase (which depends on the Civil Registry), making the overall process still slow.

But the benefits of this new instruction will change the situation for the better from now on.

What are the main advantages of this new measure?

The situation until now was quite worrying.

Nowadays, the vast majority of Civil Registries are very saturated and do not have appointments, sometimes having to wait months or even a whole year to get an appointment for the citizenship oath.

This is especially true in large cities such as Madrid or Barcelona where a large number of applications are processed.

This new measure aims to put an end to this situation, offering an extra alternative when carrying out the oath that will decongest the different Civil Registries.

That is to say, the fact of being able to go to the notary means higher easiness in terms of the procedure, especially those municipalities in which getting an appointment is a nearly impossible task.

Thus, taking the oath at the notary’s office will be a great alternative to save time in obtaining the nationality; although it depends on which city you are currently living in.

For in those places where the appointments at the Civil Registry already work properly without much delay, it may not be that necessary.

However, if you live in a big city and it was quite difficult for you to get an appointment for the oath, the notary is now your best ally.

Will I be able to choose any notary to take the oath?

Unfortunately, it seems that no: the notary with whom you will carry out the procedure will not be something you will be able to freely choose.

For the time being, it will be the Spanish College of Notaries itself who will assign you a notary on duty.

It is logical to think that those notaries who handle a greater number of procedures and files on a daily basis will be excluded (i.e., the largest and most saturated notary’s offices will be excluded and will not be able to perform this procedure), so that those who have greater availability can handle it faster.

The fact of not being able to choose a notary office could make the process a bit more inefficient and slower, as you will have to go through this extra step of having to contact the Colegio de Notarios and wait for the assignment of a professional.

Let’s see how the notary process will work.

First of all, once you are granted your citizenship favorable resolution and receive the notification from the Ministry of Justice, you must submit your application to the College of Notaries located in your province to carry out the oath of allegiance (in case you choose this path and decide not to proceed with the Civil Registry).

After what will probably be 1 or 2 weeks of waiting (we still don’t know exactly how long it will take), the College will assign you a notary on duty to whom you will have to visit.

Once you know which notary has been assigned to you, you will have to go to her office with all the required documentation (together with your NIE) to take the oath to the Constitution and the Spanish.

Keep in mind that initially, this procedure may take a little longer, as it is something that these notaries are not yet used to perform.

In addition, we do not know in what way the current health measures will alter and make everything slower (for example with a lower frequency of appointment dates).

In any case, once the oath is formalized, the notary will send the file to the Civil Registry, who will make the registry entry with the registration of the Spanish birth certificate.

DICIREG, the IT platform that will bring it all together

As we mentioned in the previous section, it will be the notary who will contact the Civil Registry to send all the information relevant to the oath so that the final registration can be carried out.

But here we will find a difference.

There is a new electronic system, an application called DICIREG that communicates and connects the notary’s office with the Civil Registry.

This system is not yet implemented in all cities, so it may not be as automatic everywhere.

That is to say, in certain municipalities where DICIREG is not in operation, the notary will perform the oath but then the person in charge of the Civil Registry, upon receiving the file, will have to make a prior analysis and assessment before being able to perform the registration (something that could delay the process a little more).

In other words, in some cases the notification will be sent electronically and immediately, while in others it will be sent “offline” through paper.

Will there be any extra cost?

As it is logical to think, yes, taking the nationality oath at the notary will have an added cost (that is, the fee of the notary itself).

However, we still do not know what exactly that cost will be; but considering that paying it will eventually save you months of waiting to get the nationality, it can be a more than efficient investment.

As well as the exact answer to this question, we still do not know all the details regarding how this new procedure will evolve.

We will keep you informed through our blog and social media as we get to know the details so that you can be up to date and get your citizenship in the most comfortable and fastest way possible.

But if you have any questions beforehand, we are at your complete disposal.

Send us an email through the following form and let our immigration and nationality lawyers guide you step by step: