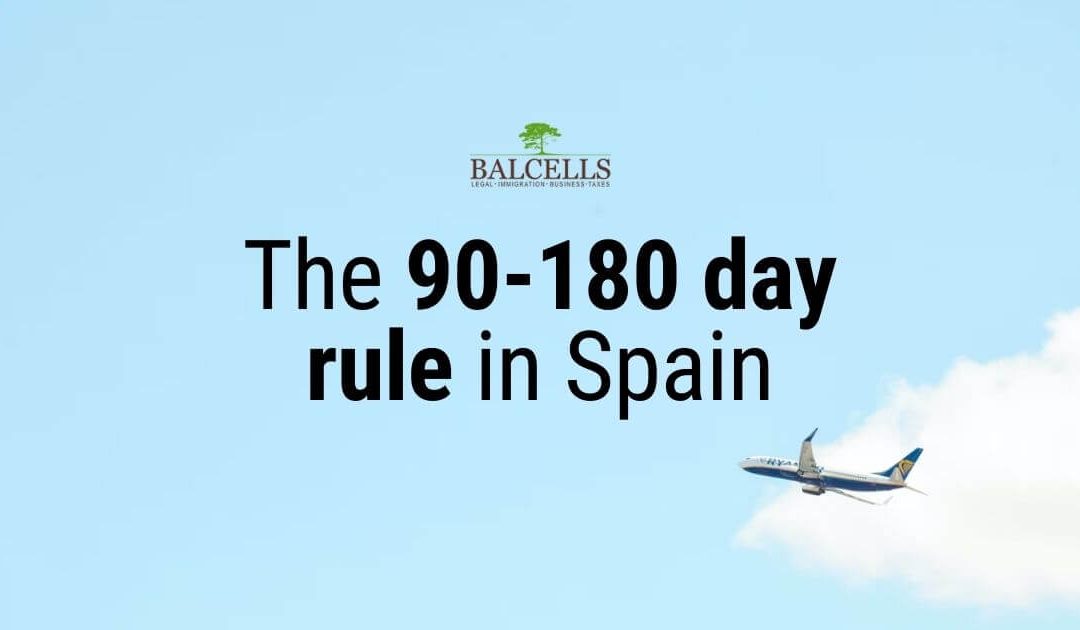 If you are going to travel to Spain, either for tourism or to start living in the country, understanding this rule is of utmost importance. Fully grasping how it works will allow you to avoid turning into an illegal situation and will save you unnecessary fines and penalties, so we recommend that you read the following sections carefully. In this post we have solved all the possible questions about the 90 – 180 days rule in Spain; answering all the doubts that foreigners from all over the world commonly have. We will see how it differs from the 183 days rule, what legal implications you may suffer if you exceed these 3 months, how to extend those 90 days allowed in the country, and much more!

What is they 90 day rule in Spain?

The 90-day rule establishes the maximum period of time that a foreigner from outside the European Union can stay in Spain during her stay as a tourist.

In other words, if you visit Spain for a short period of time without having a residence permit, whether your country of origin required you to apply for a tourist visa or not, you can stay for a maximum of 90 days before you actually have to leave or obtain a legal residence permit.

Although, if we are really precise, this 3-month period applies to Spain as well as to any other country in the Schengen area.

So, even if you are in Spain for only one month, you will still have a maximum of 2 months left before having to leave the Schengen area as a whole. You can find the complete list of countries that are part of this area here.

This is because there is no control or border between the member states of this common area, so you can travel freely between them. Hence, this rule applies on a supranational scale rather than just focusing on a single country.

Important! Everything we mention throughout this article also applies to EU citizens. However, they have it much easier to complete the legal procedure/s required to stay for more than 3 months in the country (they simply have to get their green card).

However, its details or particularities generate tons of doubts. And that is what we will dive into next.

When can I return to Spain after 90 days?

The first thing to keep in mind is that these 90 days are counted within a period of 6 months (1 semester).

In other words, they are 90 days added together, they do not have to be consecutive, and must be considered in any 6-month ruling period.

What does this mean?

Simple. It is not possible to stay 90 days in Spain, travel to another country outside the Schengen area, stay 1 day there, and then re-enter Spain.

In this case, if you have been 3 full months in Spanish territory, you must wait 3 extra months after leaving the country if you wish to re-enter again: thus having completed 90 days within a period of 6 months.

When do those 90 days start counting?

This question is very simple and straightforward. These 90 days start counting the day you first crossed the border of the Schengen area.

That is, if you traveled by plane from any country outside the EU and landed first in France, for example, even if you travel to Spain the next day, the 90 days period starts counting from your landing in France, since it is the first country within the Schengen area that you have stepped in during this period of 6 months.

Do you have doubts so far? Keep on reading for more information or directly ask any questions to our immigration lawyers:

Can I extend this period?

Yes, it is possible to extend these 90 days as a tourist, although it is quite complicated.

To do so, it is necessary to apply for this extension at the national police.

In most cases, that request will get rejected, as the extension is only admitted and approved if exceptional circumstances occur.

We are talking, for example, of cases in which you have suffered an accident that prevents you from returning back to your country of origin, or of contracting supervening diseases.

What happens if you stay over 90 days in Spain?

What happens if I stay too long in Spain? Legally speaking, you would be under an irregular situation.

That is, in the eyes of the immigration law, you would be committing a serious infraction that could result in significant penalties.

But, depending on the seriousness of your particular case, an expulsion process could be initiated.

However, this expulsion process is something that rarely happens, because first of all the authorities must discover that you have overstayed in the country and then open a sanctioning procedure in which you can always submit allegations so that they review their decision.

In the event that this sanction does occur and results in an expulsion from the country, this would imply that you will have the entry prohibited to Spain for the next 5 years (which would eliminate your capacity to apply for a residence permit).

In addition, you should bear in mind that the days that you exceed the allowed time would count for the next semester. In other words, if you stay 6 months instead of the 3 allowed, you will have to wait a total of 1 year to re-enter Spain (3 months of waiting for the first 6-month ruling period, and 3 extra months corresponding to the time you have exceeded that are associated with the following 6 months).

Finally, and answering the question that many foreigners have, if you have overstayed the 90 days and return to your country, it is really unlikely that you will be stopped at the airport, and you will rarely be fined there.

Important: don’t mistake it for the 183-day rule

Up to this point we have analyzed the 90-day rule in Spain, which sets the maximum period of time you can stay in the country as a tourist before entering an irregular situation.

The problem is that this rule is often called the 180-day rule too (since you are allowed to stay in Spain for 3 months within a total period of 180 days), and it generates a lot of confusion with another rule with a similar name: the 183-day rule.

And the truth is that they have nothing to do with each other.

The 183-day rule marks the turning point between being a resident and a non-resident in Spain. In other words, if you are living in Spanish territory and during a calendar year (from January to December) you spend more than 183 days in the country, you become a resident.

This, among others, has important implications for tax purposes: if you are a resident you will pay income tax or IRPF on all the income you generate worldwide, and the tax rates differ.

But, as you can see, it does not dictate how long you can stay in Spain as a tourist.

What can I do before the 3 months are up?

Finally, let’s look at the different options you have to avoid legal problems.

As we have discussed so far, you have a total of 90 days in Spain as a tourist.

If you want to avoid entering into an irregular situation and run the risk of receiving a sanction, you have two main options:

But be careful with this second option. If you are already in Spain, the range of available residence permits will be reduced (as many of them require you to start the application at the Spanish consulate from your country of origin).

In this article you can find the complete list of residence permits that you can get as a tourist in Spain, including the investor visa, the student visa, or the family member of an EU citizen card among the most popular ones.

However, the most recommended is to contact a team of immigration lawyers to provide legal assistance so you can perfectly understand what your options are (knowing that each case is completely different). Thus, you can contact us through the following link and receive personalized advice: