Voluntary Return: Application Procedure, Requirements & How to Return After 3 Years 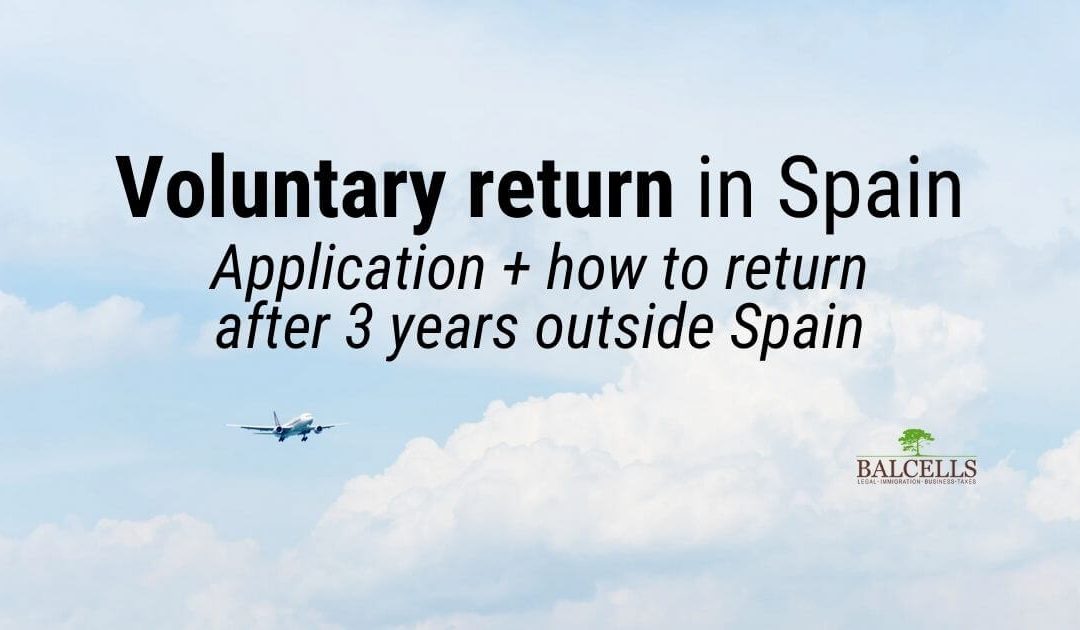 If you have been in Spain for some time working contributing to the Spanish Social Security, thanks to the voluntary return you can collect all your unemployment benefits in just 2 payments and return to your country of origin. In this post you will discover how to apply for this procedure step by step, the requirements that must be met, as well as the 3 available paths to return back again to Spain after having benefited from the voluntary return years ago.

What is the voluntary return?

Voluntary return is a measure that was approved by the Spanish government a few years ago by which a kind of pact to foreigners who had worked in the country and who are now entitled to collect unemployment benefits is available.

What is this deal all about?

The government allows these foreigners to collect their unemployment benefits in advance (i.e., the total amount in just two payments instead of collecting it month by month in installments), in exchange for returning to their country of origin and not returning to Spain for at least 3 years.

But before we continue with more information about this procedure, some extra guidance regarding where this right comes from is required.

When you work for a company in Spain (legally), you are paying monthly Social Security contributions.

That is to say, part of your gross salary goes to this institution, and that money is accumulated little by little to create a fund with which in the future you will be paid unemployment benefits in case you become unemployed. This is something that you can see broken down in your payroll.

Therefore, each month you work you are increasing the future size of your unemployment benefits (that is, more money available), and that is the total amount you would receive if you apply for the voluntary return.

Hence, this is not a “gift” offered by the government for you to leave the country, it is a different (concentrated) way of paying you the money that you have been generating and that actually belongs to you.

What’s next is the complete list of requirements that you must meet in order to be eligible for this measure:

Where and how do I apply?

You have 4 different options to submit your initial application:

As mentioned above, you must be entitled to unemployment benefits in order to apply for the voluntary return.

However, both applications are independent (unemployment and voluntary return), and both can be submitted at the same time.

What should you include in your application?

How is the payment of the voluntary return made?

The payment of your unemployment benefits thanks to this voluntary return is made via two different installments:

The first payment corresponds to 40% of the total amount, and it is granted in Spain (before leaving the country) once the foreigner has applied for this procedure. That is to say; once the aid is approved, something that the administration notifies (in this case the SEPE), by mail.

In case of having any outstanding debt with the public administration (either Social Security or Tax Agency), this would be deducted from that first payment.

Once this 40% has been received, the foreigner has a maximum of 30 days to leave Spain.

Once the foreigner arrives in her country of origin, she will receive the remaining 60%, between 30 calendar days and 90 days after her arrival.

To do so, the foreigner must visit the Spanish diplomatic or consular representation in her country of origin, and notify her arrival by handing in her NIE, Spanish residency card, and the document that certifies the approval of the return request.

Do you have any doubts so far? Ask anything to our immigration lawyers here or keep reading for more information:

How to return to Spain after a voluntary return

Did you take advantage of the voluntary return years ago now would like to return to Spain but you don’t know how? In this section are your doubts will be solved.

As you know, your prohibition to return to Spain ends after 3 years.

Once this period has passed, can you easily recover the same card you had before, or which are the exact steps should you take?

The answer will depend on the type of card were a holder of before leaving Spain:

Returning with a temporary residency

If you were living in Spain with a temporary residence card (i.e., for 1 or 2 years) when you took advantage of the voluntary return, unfortunately now you will have to start your procedure from scratch if you want to return to Spanish territory.

That is to say, you must apply for an initial residence authorization since it is not possible to recover the same one you had before (it was totally extinguished).

However, not everything is bad news.

The most common thing is that the foreigner who returns to Spain after the voluntary return applies for a work permit as an employee (to work for a Spanish company), since she will enjoy a preferent status whithin the application procedure.

In other words, one of the advantages of having benefited from this advance payment of your unemployment benefits is that the national unemployment situation won’t be taken into account in your application, and you will be able to obtain a work visa straightforwardly.

Finally, the procedure remains the same: you will have to apply from your country of origin (at the Spanish consulate or embassy), after obtaining a job offer from a Spanish company before traveling to the country.

Returning with a long-stay card

On the other hand, we also find the case in which the foreigner initiated her voluntary return application while holding a long-term card, the 5-year one (formerly known as permanent residence).

If that is your case, you will have it much easier.

Because you can easily recover your card without starting the process from scratch.

You have two options to do it: from your country of origin or directly from Spain.

In either case, you will be then able to live and work legally in the country with the same conditions as before.

Return if you are under the community regime

Finally, we find a third case, a little more atypical.

We are talking about foreigners who were residing in Spain under the EU regime (i.e., they had a visa because they were family members of a European Union citizen).

Being under the EU regime (and not the general Spanish immigration regime), these foreigners could return to Spain even before the end of the 3-year entry ban.

Because the community law is above the said prohibition, entry should be totally possible.

Can I benefit from the voluntary return if I am a Spanish nationalized foreigner?

Many foreigners who have worked and contributed legally in Spain and who have dual nationality (that of their country of origin, normally from a Latin American country, and the Spanish nationality) ask us if they can also benefit from this voluntary return plan.

And the answer is that, unfortunately, no.

One of the main requirements of this legal agreement is that the applicant must be a foreigner.

Having obtained Spanish citizenship, you have already become a Spanish national, so you can not benefit from this payment + return to your country offer.

In addition, a Spanish citizen cannot be banned from entering Spain; it is not possible to prohibit entry to the country of which you are a national.

So far we have analyzed the case of the voluntary return, but there is another type of return for foreigners at risk of social exclusion and with special needs.

We are talking about people who do not have the economic resources to return to their country of origin, whether they are unaccompanied minors, victims of gender-based violence, victims of trafficking, pregnant women, etc.

The most common case is that of asylum seekers who give up waiting for a positive resolution.

In all these cases, the foreigner may also be eligible for return (in this case the humanitarian one), without the need to have been working or paying social security contributions.

This humanitarian return is managed by non-governmental and international organizations; such as:

Remember that if you need help with your application for voluntary return, our immigration lawyers are at your complete disposal: