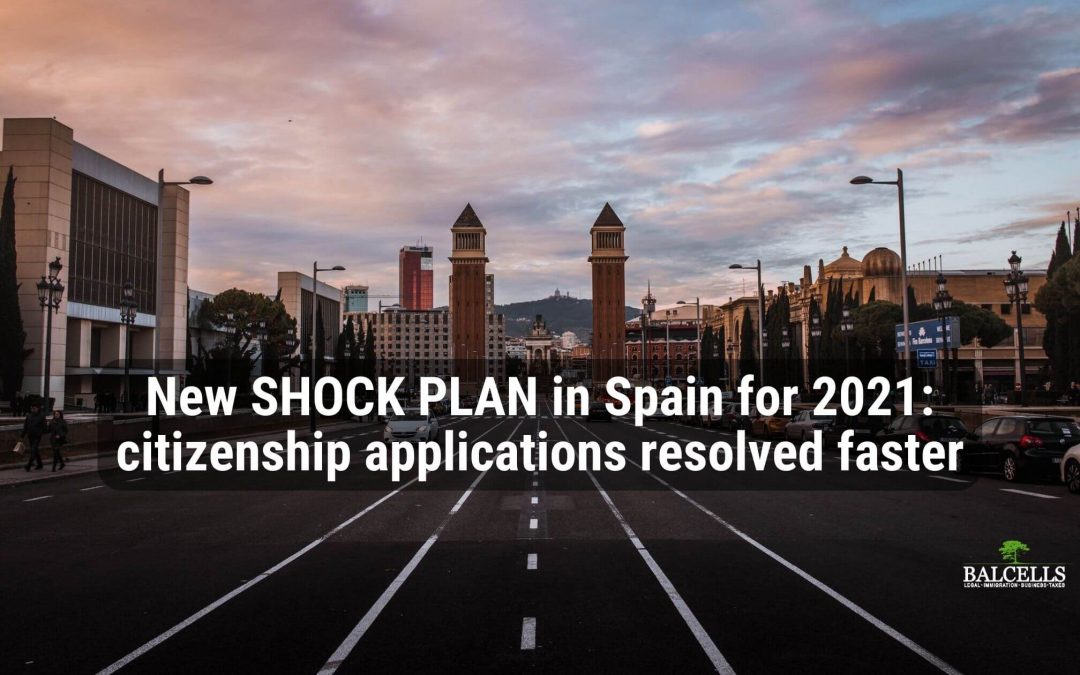 Good news! What many of us have been waiting for has finally become a reality. The 2021citizenship shock plan has already started, and in this article you will find all the details. Would you like to know if your nationality application will benefit from this initiative and you will hence be able to get a much faster resolution? Then keep on reading!

Content hide
1 What exactly is a nationality shock plan?
2 About the 2021 shock plan
3 Which will be the citizenship files the shock plan is going to be focused on?
4 Will it also benefit applications submitted during 2021?
5 How long will it last?
6 The problem with the oath

What exactly is a nationality shock plan?

If you are a foreigner in Spain that has obtained citizenship, or you are right now in the middle of its application process, you can understand the situation perfectly.

This procedure can last forever. Your file can become “frozen” in any of the existing phases, and can even be stuck for 2 or 3 years, as has happened on many occasions.

Thus, a shock plan is an initiative that aims to solve this problem.

It is the process through which the Ministry of Justice seeks to speed up the resolution of Spanish nationality files that have been accumulated.

That is to say, it consists of a series of actions that are put in place to resolve much more quickly all those applications that have been at a standstill until now. These actions are, for example, bringing together public workers from other departments to focus on this job, incorporating new personnel, or having certain state servants working overtime with the sole function of resolving additional files (as is the case on this occasion).

While it is true that in 2019 there was a shock plan in Spain that lasted until the beginning of 2020, it certainly was not enough.

That is why the shock plan that was launched a few days ago is intended to be the solution that many have been waiting for a long time.

Since last Friday, March the 5th, the 2021 shock plan has been active; which aims to resolve thousands of pending nationality applications (which were over 300.000 at the beginning of this year).

For practical purposes, what does this mean for you who have applied for citizenship?

Most likely (if your file is included in the plan) you will get a response and resolution much more quickly (avoiding waiting times longer than 1, 2, or 3 years).

While it is true that this process has already begun, we do not yet have all the details. Nevertheless, the Ministry of Justice has been announcing important information during the past weeks (but we still don’t have the full picture).

We will keep you informed through our blog as news comes out, but below in this article you can find what is most likely to happen according to what we have seen in previous years’ shock plans.

What we do hope is that this is not a temporary measure.

As established by law, nationality resolutions should be granted in a maximum of 1 year. While it is true that this shock plan will do a great job in resolving many cases, the ultimate goal should be to create a system that avoids the need to initiate legal proceedings in the future as the resolutions again freeze dramatically as they have done so far.

Do you have any doubts so far? Ask anything to our lawyers here or continue reading for more information:

Which will be the citizenship files the shock plan is going to be focused on?

Basically, this plan will focus both on citizenship by residency applications (the most common path, which is why this plan will put greater emphasis on those), as well as on nationality files as descendants of Sephardic Jews, which, although to a lesser extent, will also be included in the shock plan.

However, the nationality by option applications would not be affected by this initiative.

But it is not yet possible to go into further details.

Within this classification, we do not yet know exactly which expedients will be the focus of the plan: whether they will be the oldest ones, those filed online, etc.

Based on how things worked for previous years’ shock plans, the 2021 one is most likely to focus on the files that have a registration number and have all the relevant information within the nationality platform; under the status “abierto – registrado”.

As for the stage of the process, as long as the file has its registration number, it will not be a factor that affects the process.

Nor will the length of time your file has been processed be a relevant issue. In other words, applications that have been pending for years will get a quick resolution from the implementation of the shock plan, as will do files that have been filed for just a few months.

Will it also benefit applications submitted during 2021?

For all those foreigners who have started their application very recently, good news.

It is very likely that this plan aimed at boosting and speeding up all citizenship resolutions will also affect applications that will be filed during the shock plan itself or that have been filed so far this year.

However, and as is obvious, the most usual thing is that priority will be given to those filed in previous years, especially files from 2020.

How long will it last?

Finally, we now know that the shock plan will be extended until the 30th of November, 2021.

This has been the date confirmed by the Ministry of Justice, so this initiative will last approximately 9 months.

What we hope now that we know its duration is that 9 months will be enough time to unblock the current situation and provide a response to the greatest number of foreigners on the eve of obtaining their citizenship.

There are many applications stuck, and high speeds will be needed in order to handle all the pending applications.

That is why Justice has put to work new government workers, who will also work overtime in order to complete this task.

The problem with the oath

If your file within the resolution phase benefits from the 2021 shock plan, you will undoubtedly have been very lucky and will get a positive resolution in record time.

But it is not all good news.

As it happened in previous years, we will most likely face another problem afterwards, also related to a backlog of applications.

One of the last steps to finally get your passport and DNI as a Spanish citizen, once you get a positive resolution of the nationality, is to complete the pledge of allegiance procedure.

Obviously, for this procedure is necessary to make an appointment and go to the corresponding Civil Registry.

What is most likely to happen if overnight a large number of citizenship files are suddenly approved?

That we will experience long delays and collapses when it comes to this last stage of the process.

Hence, the really lucky ones will be those that become one of the first to benefit from this plan, otherwise you will have to wait extra time at the allegiance stage.

However, a new measure has recently been published that intends to solve this problem. It is now possible to swear the oath of nationality also before a notary and in the different Spanish consulates. This will allow the applicants who pass the crash plan to complete the whole process without delays.

And remember that if you have any doubt, our lawyers will answer you instantly: